High-quality cover art for the forthcoming DC Nation Flip Book, released as part of the 2012 Free Comic Book Day Event, is available to view below. Free Comic Book Day is administered by a panel representing all parts of the comic book industry: retailers, publishers, suppliers, and Diamond Comic Distributors. Each year, publishers apply to provide comic books at cost to retailers, who in turn give them away for free. Diamond handles marketing and logistics for the event, shipping comics to shops and handling marketing and PR for the event. Click on the image below for a closer look.

Those interested in joining the Xbox 360 version of the beta can go to https://www.gothamcityimpostors.com/beta/ to register for a chance to receive a key. The PS3 version is available in the PSN and can be downloaded without a key. 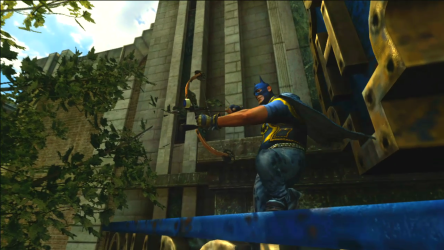 Gotham City Impostors is a download only title that will be available in the Xbox LIVE Marketplace for the Xbox 360 video game and entertainment system from Microsoft, PlayStationNetwork and Windows PC. Fans of the game can go to www.GothamCityImpostors.com for the latest updates and news.

Gotham City Impostors is an original download-only first-person shooter where up to 12 players battle for control of an unhinged Gotham City overrun by Impostors inspired by the DC Comics characters Batman and The Joker. Gotham City Impostors is an online multiplayer game unlike any other, giving players the opportunity to rebel against conformity as they customize their own characters. Fighting for justice or creating chaos, gamers will create their very own version of the Bats or the Jokerz characters using unprecedented customization options including insane costumes, homemade gadgets and a wide range of traditional and inventive weapons. The game will feature maps and modes inspired by DC Comics Batman license.

Gotham City Impostors is scheduled for release on January 10th, 2012 and will be available on Xbox LIVE Arcade and PlayStationNetwork, as well as for PC. Fans can go to www.GothamCityImpostors.com for more information and to receive updates regarding the game.