Warner Home Video has announced the Justice League: Doom animated feature’s debut at The Paley Center for Media in New York has sold out. The event, set for February 13th, 2012, is the world premiere of the next installment of the ongoing DC Universe Animated Original Movie line. Justice League: Doom arrives February 28, 2012 from Warner Home Video as a Blu-Ray Combo Pack and DVD, On Demand and for Download. Both the Blu-Ray Combo Pack and DVD will include an UltraViolet Digital Copy. Continue below for the press release. 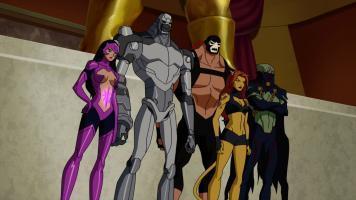 The event is completely sold out, and fans winning tickets via the RSVP email have been notified of their good fortune. However, a very limited number of VIP seats will still be made available to fans through MTV Geek, as well as the Justice League: Doom Facebook page. Fans should keep their browser focused on those two pages for details of the giveaways.

Conroy, Morris and Romano will attend the event for red carpet media interviews and a post-screening panel discussion. Conroy set the standard for the voice behind the Dark Knight in the landmark Batman: The Animated Series. Morris is best known for his roles on Seinfeld and Smallville, and is currently nominated for a NAACP Image Awards in the category of Outstanding Actor in a Comedy Series for Love That Girl!

Red carpet interviews will commence at 5:30 p.m., and the film will roll at 6:30 p.m. A panel discussion will follow the screening. The Paley Center for Media is located at 25 West 52nd Street, New York, NY.

Voice cast members and filmmakers will be announced as confirmed for the event. The Paley Center for Media is located at 25 West 52nd Street, New York, NY.