Cartoon Network has provided the following press details and image for the freshly-announced Teen Titans Go!, an all-new animated series debuting 2013 on the DC Nation programming block. Continue below to view the full press release details. 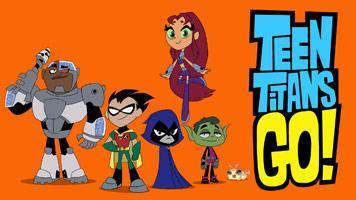 DC Nation, Cartoon Network’s home for action-packed animated series and original shorts based on characters from DC Comics (Saturdays 10:00–11:00 a.m. ET/PT), will soon be joined by a new generation of superheroes as Teen Titans Go!, a brand-new half-hour comedy-action series inspired by Warner Bros. Animation’s original fan-favorite series Teen Titans, shows the humorous side of being a teenage hero.

Teen Titans Go! features the return of Robin, Starfire, Raven, Beast Boy and Cyborg in all-new, comedic adventures. Character-driven comedy is the order of the day as this new take on the super hero series focuses on the funny business that happens between saving the world and living together as teenagers without adult supervision. They may be super heroes who save the world every day … but somebody still has to do the laundry! With the ability to turn into any animal or detach their robotic limbs, teenage pranks reach a whole new level. And even super heroes have to take Driver’s Ed. to get a license – especially after wrecking the Batmobile on an unauthorized joy ride to impress a girl!

Featuring the principal voice cast from the original series – Greg Cipes as Beast Boy, Scott Menville as Robin, Khary Payton as Cyborg, Tara Strong as Raven and Hynden Walch as Starfire – Teen Titans Go! recaptures everything audiences loved about the original show, while adding laughter at the lighter side of being a super hero. Executive produced by Sam Register (Green Lantern: The Animated Series, The Looney Tunes Show, Teen Titans), with Michael Jelenic (ThunderCats, Batman: The Brave and the Bold) and Aaron Horvath (MAD, El Tigre) as producers, this side-splitting series will premiere on Cartoon Network in 2013 as part of the DC Nation programming block.

Cartoon Network (CartoonNetwork.com) is the #1 U.S. television network among Boys 6-11. Currently seen in 99 million U.S. homes and 168 countries around the world, Cartoon Network is Turner Broadcasting System, Inc.’s ad-supported cable service now available in HD offering the best in original, acquired and classic entertainment for kids and families. In addition to Emmy-winning original programming and industry-leading digital apps and online games, Cartoon Network embraces key social issues affecting families with solution-oriented initiatives such as Stop Bullying: Speak Up and the Move It Movement.

Warner Bros. Animation (WBA) is one of the leading producers of animation in the entertainment industry, with an innovative and talent-rich roster boasting some of the most accomplished writers, producers and artists working today. The studio is on the cutting edge of animation technology and has both CG and traditionally animated projects in current production and development. For TV, WBA produces series such as Green Lantern: The Animated Series, The Looney Tunes Show, MAD, Scooby-Doo! Mystery Incorporated, ThunderCats, Young Justice: Invasion and the forthcoming Beware The Batman for Cartoon Network. WBA also produces series and additional original content — including animated shorts — for Cartoon Network’s multiplatform branded DC Nation programming block. In addition to TV programming, WBA produces theatrically released CG cartoon shorts featuring iconic Looney Tunes characters, rendered in stereoscopic 3D. WBA also creates the highly successful series of DC Universe Original Animated Movies for DVD. Producing for multiple platforms including TV, digital and home entertainment both domestically and internationally, WBA is highly respected for its creative and technical excellence, as well as for maintaining the Studio’s rich cartoon heritage. It is also the home of the iconic animated characters from the DC Comics, Hanna-Barbera, MGM and Looney Tunes libraries. One of the most-honored animation studios in history, WBA has been honored with six Academy Awards®, 35 Emmy® Awards, the George Foster Peabody Award, an Environmental Media Award, a Parents’ Choice Award, the HUMANITAS Prize, two Prism Awards and 20 Annie Awards (honoring excellence in animation).

Teen Titans Go! has an initial episode order of 26 episodes, with the option for a additional pick-ups. The new animated series from Warner Bros. Animation and Cartoon Network will join the DC Nation programming block in 2013. Stay tuned for further coverage on Teen Titans Go! right here at The World’s Finest.