Cartoon Network has provided The World’s Finest with a new hi-res promotional image for the upcoming Teen Titans Go! animated series. The upcoming series, slated to debut in 2013 as part of the DC Nation block on Cartoon Network, features a new comedic spin on the fan-favorite action/comedy Teen Titans animated series. Click on the thumbnail below for a much closer look at the new images. 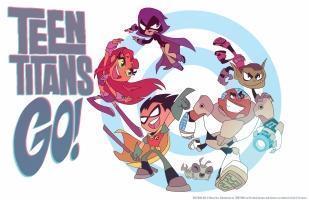 The official series description for the series is available below.

Teen Titans Go! features the return of Robin, Starfire, Raven, Beast Boy and Cyborg in all-new, comedic adventures. Character-driven comedy is the order of the day as this new take on the super hero series focuses on the funny business that happens between saving the world and living together as teenagers without adult supervision. They may be super heroes who save the world every day … but somebody still has to do the laundry! With the ability to turn into any animal or detach their robotic limbs, teenage pranks reach a whole new level. And even super heroes have to take Driver’s Ed. to get a license – especially after wrecking the Batmobile on an unauthorized joy ride to impress a girl!

Featuring the principal voice cast from the original series – Greg Cipes as Beast Boy, Scott Menville as Robin, Khary Payton as Cyborg, Tara Strong as Raven and Hynden Walch as Starfire – Teen Titans Go! recaptures everything audiences loved about the original show, while adding laughter at the lighter side of being a super hero. Executive produced by Sam Register (Green Lantern: The Animated Series, The Looney Tunes Show, Teen Titans), with Michael Jelenic (ThunderCats, Batman: The Brave and the Bold) and Aaron Horvath (MAD, El Tigre) as producers, this side-splitting series will premiere on Cartoon Network in 2013 as part of the DC Nation programming block.

Click here for the entire Teen Titans Go! press release. Teen Titans Go! has an initial episode order of 26 episodes, with the option for a additional pick-ups. The new animated series from Warner Bros. Animation and Cartoon Network will join the DC Nation programming block in 2013. Stay tuned for further coverage on Teen Titans Go! right here at The World’s Finest.