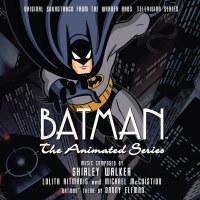 According to the representative, Batman: The Animated Series – Original Soundtrack From The Warner Bros. Television Series, Volume Three – set for a tentative 2013 release – will include score material from “Robin’s Reckoning, Parts 1 and 2,” “Day of the Samurai,” “The Clock King,” and other select episodes from the first 65 episodes from the acclaimed animated series. Following that release, La-La Land Records plans to produce multi-disc CD soundtrack releases for episodes from the The Adventures of Batman & Robin and The New Batman Adventures eras of the acclaimed 1990s animated series. Soundtracks for the direct-to-video animated features Batman & Mr. Freeze: Sub-Zero and Batman: Mystery of the Batwoman are also tentatively in the works.

Additionally, the label is looking at releasing soundtrack titles for Superman: The Animated Series, Justice League, Justice League Unlimited, and other as-of-yet unnamed animated shows and movies based on DC Comics properties within the next few years.

The World’s Finest will continue to follow and cover these soundtrack releases titles.

Batman: The Animated Series – Original Soundtrack From The Warner Bros. Television Series, Volume Two will be exclusively available from July 11-15th, 2012 at San Diego Comic-Con courtesy of La-La Land Records at Booth 429, before going wide at 1pm (PT) on July 19th, 2012 through the label’s official website and specialty outlets. The collection is priced at $60. The original press details for this release can be found here with initial track details available here.