Warner Home Video has provided the final Blu-ray and DVD package artwork for the upcoming Batman: The Dark Knight Returns, Part One animated feature release, hitting shelves September 25th, 2012 as part of the DC Universe Animated Original Movie line. This latest animated DC Comics-based film is the first in a two-part adaptation of the acclaimed 1980s comic series The Dark Knight Returns starring a retired Batman who dons the cape and cowl to deal with a city decaying into crime. As of now, a single-disc DVD and Blu-ray combo pack edition of the movie are confirmed for release, with no details as of yet for Two-Disc Special Edition DVD release. Click on the thumbnails below for a closer look at the images. 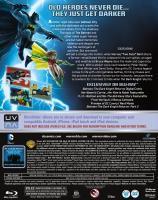 Click here to view the Batman: The Dark Knight Returns, Part One trailer and for a further breakdown of the Blu-ray Combo Pack bonus features. A gallery of images from the trailer can be found here, exclusive to The World’s Finest.