Warner Home Video has released a new trade ad for the direct-to-video Batman: The Dark Knight Returns, Part One animated feature, slated to arrive on home video on September 25th, 2012. The animated feature adapts the acclaimed landmark 1980s comic series The Dark Knight Returns, featuring an aged Batman forced out of retirement to save a crumbling city. Click on the image below for a closer look at the ad. 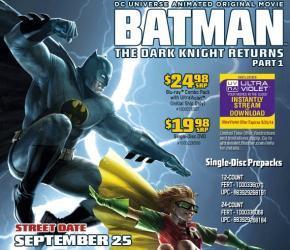 According to the ad, the Batman: The Dark Knight Returns, Part One animated feature has a run time of 78 minutes and will be released on Blu-ray Combo Pack and single-disc DVD. A two-disc Special Edition DVD release is likely, though currently unconfirmed.

Click here to view the Batman: The Dark Knight Returns, Part One trailer and for a further breakdown of the Blu-ray Combo Pack bonus features. A gallery of images from the trailer can be found here, exclusive to The World’s Finest.