La-La-Land Records and CineMedia Productions have provided a press release announcing the new Green Lantern: The Animated Series – Original Score from the DC Comics Animated Television Series CD soundtrack title. The soundtrack has been available directly from La-La Land Records since July 31st, 2012, and will be available through Amazon and general retail outlets on August 21st, 2012. Continue below to read the complete promotional press release. 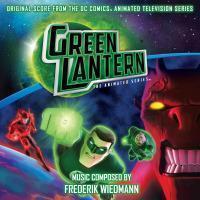 Based upon the DC Comics super hero, Green Lantern: The Animated Series follows Earth’s Green Lantern, Hal Jordan, who is used to being in dangerous situations — but he’s never faced anything like this! Set in the farthest reaches of deep space, the series finds Hal on the Guardian Frontier, where he must face down an invasion from the Red Lantern Corps.

“The score for the Green Lantern series is a big and epic orchestral score, filled with themes and world instruments,” said Wiedmann. “Since most of the story takes place in space, the musical possibilities are endless. I get to write a blend of sci-fi, heroic action, adventure, utilizing all kinds of worldly instruments. It is a rare opportunity for a composer to have this much variety in creating music for one project.”

Born in Stuttgart, Germany, Frederik Wiedmann came to Los Angeles in 2004 to become a film composer. After three years working as an assistant to veteran composer John Frizzell, Wiedmann scored his first feature Return to House on Haunted Hill for Dark Castle Entertainment (Warner Brothers) in 2007.

Wiedmann is also teaching a music technology course in the highly acclaimed Scoring for Motion Pictures and TV graduate program at USC, where he is sharing is extensive knowledge of music production and writing music for the movies.

Continue to the Green Lantern: The Animated Series subsite for exclusive images from the soundtrack release.

The Green Lantern: The Animated Series – Original Score from the DC Comics Animated Television Series soundtrack CD release retails for $15.98 US, and is currently available to order through the official La-La Land Records website and other online specialty vendors. The release goes wide on August 21st, 2012, available through an assortment of online and retail vendors. A representative for La-La Land Records recently confirmed plans to release further soundtrack releases for assorted animated series and features based on DC Comics properties, which includes the possibility of further Green Lantern: The Animated Series soundtrack titles. Further details are expected to be announced by the label later this year.