Warner Home Video has provided the following press release, Blu-ray cover art with bonus feature details, and trailer for the upcoming Batman: The Dark Knight Returns, Part One animated feature. Due to hit shelves on September 25th, 2012, the animated feature adapts the acclaimed comic series of the same name. Batman: The Dark Knight Returns, Part One is set to cover the first two installments of the four-part comic series. Continue below to view the trailer – in high-definition and standard definition – along with an early look at the Blu-ray cover art and the official announcement press release. 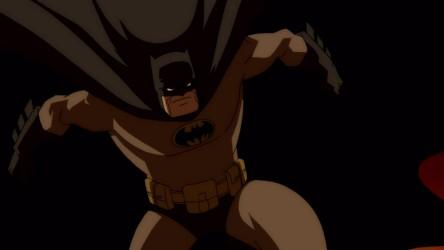 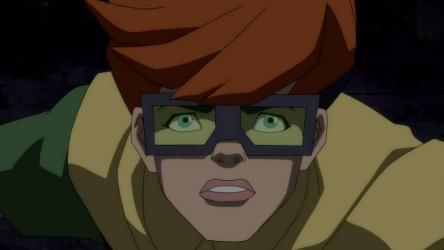 Frank Miller’s landmark graphic novel about fear, hope and redemption is celebrated with proper measures of haunting visuals and intense action in Batman: The Dark Knight Returns, Part One, the next entry in the popular, ongoing series of DC Universe Animated Original Movies. Produced by Warner Premiere, DC Entertainment and Warner Bros. Animation, the all-new, PG-13 rated film arrives September 25, 2012 from Warner Home Video as a Blu-ray™ Combo Pack and DVD, On Demand and for Download. The Blu-ray™ Combo Pack will include UltraViolet™.

The DC Universe Animated Original Movies have been a fan favorite since debuting in 2007 with Superman Doomsday. Now averaging three releases each year, the DCU animated films are based on classic tales from DC Comics’ revered library or original stories featuring DC’s fabled characters. Stars of feature film and primetime television populate the stellar voice casts of the DCU animated films. Batman: The Dark Knight Returns, Part One represents the 15th film in the ongoing series.

In the bleak and ominous future of Batman: The Dark Knight Returns, Part One, it’s been a decade since Bruce Wayne hung up his cape, following most of the other superheroes who had been forced into retirement. Facing the downside of middle age, a restless Bruce Wayne pacifies his frustration with racecars and liquor – but the Bat still beckons as he watches his city fall prey to gangs of barbaric criminals known as The Mutants.

The return of Harvey Dent as Two-Face finally prompts Wayne to once again don the Dark Knight’s cowl, and his dramatic capture of the villain returns him to crime-fighting – simultaneously making him the target of law enforcement and the new hope for a desolate Gotham City. Particularly inspired is a teenage girl named Carrie, who adopts the persona of Robin and ultimately saves Batman from a brutal attack by the Mutant leader. Armed with a new sidekick, and re-energized with a definitive purpose, the Dark Knight returns to protect Gotham from foes new … and old.

“Frank Miller’s classic re-imagining of Batman has been faithfully recreated under Bruce Timm’s skilled guidance as a masterpiece of storytelling,” said Mary Ellen Thomas, Warner Home Video Vice President, Family & Animation Marketing and Partner Brands. “This story has been treated with great reverence, including a tour-de-force performance by science fiction legend Peter Weller as the voice of Batman. We know our fans will not only love this film as a stand-alone, but will clamor for the release of the second half next year.”

Batman: The Dark Knight Returns, Part One Blu-ray™ Combo Pack has more than 2 hours of exciting content, including:
• Standard and high definition versions of the feature film
• UltraViolet™*
• Sneak Peak at Batman: The Dark Knight Returns, Part 2, the next DC Universe Animated Original Movie
• Featurette – “Her Name is Carrie … Her Role is Robin” – An all-new featurette. Experience the role of Robin, through the eyes of a female warrior.
• Featurette – “Batman and Me: The Bob Kane Story” – A documentary comprehensively chronicling the remarkable life of the creator of Batman.
• Two bonus episodes from Batman: The Animated Series handpicked by producer Alan Burnett: Two-Face, Parts 1 and 2
• Digital Comic – “Batman: The Dark Knight Returns” (digital comic with cover art and three full comic pages)

About Warner Premiere:
Warner Premiere specializes in the development and production of both features and digital content for home entertainment platforms. Past projects include A Cinderella Story: Once Upon a Song, Scooby-Doo! Curse of the Lake Monster and Batman: Year One, as well as the digital series Mortal Kombat: Legacy and Aim High. Warner Premiere is at the creative forefront in the made-for-home entertainment marketplace, producing properties that exemplify the commitment to story, production and brand equity for which Warner Bros. is known.

About Warner Bros. Animation
Warner Bros. Animation (WBA) is one of the leading producers of animation in the entertainment industry, with an innovative and talent-rich roster boasting some of the most accomplished writers, producers and artists working today. The studio is on the cutting edge of animation technology and has both CG and traditionally animated projects in current production and development. For TV, WBA produces series such as Green Lantern: The Animated Series, The Looney Tunes Show, MAD, Scooby-Doo! Mystery Incorporated and Young Justice: Invasion, as well as the forthcoming Beware The Batman and Teen Titans Go!, for Cartoon Network. WBA also produces series and additional original content — including animated shorts — for Cartoon Network’s multiplatform branded DC Nation programming block. In addition to TV programming, WBA produces theatrically released CG cartoon shorts featuring iconic Looney Tunes characters, rendered in stereoscopic 3D. WBA also creates the highly successful series of DC Universe Original Animated Movies for DVD. Producing for multiple platforms including TV, digital and home entertainment both domestically and internationally, WBA is highly respected for its creative and technical excellence, as well as for maintaining the Studio’s rich cartoon heritage. It is also the home of the iconic animated characters from the DC Comics, Hanna-Barbera, MGM and Looney Tunes libraries. One of the most-honored animation studios in history, WBA has been honored with six Academy Awards®, 35 Emmy® Awards, the George Foster Peabody Award, an Environmental Media Award, a Parents’ Choice Award, the HUMANITAS Prize, two Prism Awards and 20 Annie Awards (honoring excellence in animation).

To note, Warner Home Video has reverted the DC Comics Premiere Movie line name back to the original DC Universe Animated Original Movie title. No specific details can be confirmed at this time, but brand identity played a key role in the line’s umbrella reverting to it’s original moniker.

Discuss Batman: The Dark Knight Returns, Part One in The DC Animation Forum!