Warner Home Video has provided The World’s Finest with new package artwork for the single-disc DVD edition and Blu-ray Combo Pack release of Batman: The Dark Knight, Part Two, arriving to the home video market on January 29th, 2013. The animated feature, the second installment of the two-part adaptation of the acclaimed 1980s comic series The Dark Knight Returns, is the first of three DC Universe Animated Original Universe titles arriving in 2013. Batman: The Dark Knight Returns, Part One debuted on home video in September 2012. Click on the thumbnails below for a closer look at the back cover package artwork for both editions. Additional press details are also included below. 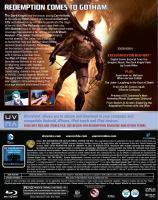 Initial bonus details for the Blu-ray Combo-Pack release are also now available, and can be seen below.

The single disc edition of Batman: The Dark Knight Returns, Part Two will also include a preview for Superman: Unbound. A full press for the upcoming release could arrive as early as next week, along with new promotional content.