Warner Home Video has announced Blu-ray releases for the animated titles Batman: Mystery of the Batwoman and Superman: Brainiac Attacks. Both titles will street on March 12th, 2013 for the MSRP of $14.98. Batman: Mystery of the Batwoman was originally set for a Blu-ray release earlier this year, but was delayed for undisclosed reasons. Superman: Brainiac Attacks is being released to coincide with the promotional push for the upcoming Man of Steel theatrical feature film. Continue below for official details on both titles released by the studio. 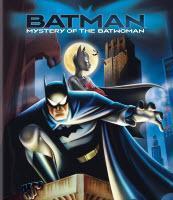 Synopsis: The Dark Knight is back in this all-new feature-length thriller featuring the voices of Kelly Ripa (Live! With Regis and Kelly), Kyra Sedgwick (Born on the Fourth of July) and Hector Elizondo (The Princess Diaries). The Penguin and Rupert Thorn are criminal cohorts with a scheme to sell illegal weapons. But there’s a new super hero in Gotham City who has other plans for the evil entrepreneurs – Batwoman! With high-tech gadgets and powerful punches, Batwoman proves to be a formidable crimefighter – the only problem is that the Dark Knight has no clue who she is! And when Batwoman crosses the criminal line, Batman must identify whether or not this new player is really an ally! Join the world’s greatest detective in this exciting new adventure that will keep you guessing until the mask is pulled off!

Synopsis: Superman, about to finally divulge his identity and his feelings to Lois Lane, suddenly finds his mighty hands full when Brainiac, a powerful computer, bent on universal domination and Lex Luthor team up to defeat him. Armed with new weapons and a special strain of kryptonite infused in his body, Brainiac becomes the most powerful enemy The Man of Steal has ever faced. When Lois Lane is critically injured by a force beam that was intended for him, Superman must race into the mysterious Phantom Zone to find a cure. Brianiac, believing Superman to be dead, betrays Lex Luthor and begins his attack on the city of Metropolis and ultimately Earth. Will Superman survive the Phantom Zone in order to defeat his deadly foes, save Lois and Metropolis?

Warner Home Video has confirmed both titles will be presented in the widescreen format.