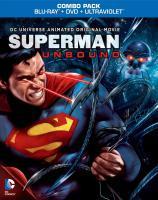 Please note the Two-Disc Special Edition DVD release of Superman: Unbound is not slated for general wide release until June 18th, 2013, but is currently available as a Wal-Mart retail exclusive.

Further information on this latest DC Universe Animated Original Movie title can be found by clicking the images above. Click on the links below to discuss both the new Superman: Unbound animated feature and its respective Blu-ray and DVD home video releases.

Click here to read the The World’s Finest reviews of the Superman: Unbound animated feature and Blu-ray release. Stay tuned for additional content and coverage of this title coming soon.

A co-production of Warner Premiere, Warner Bros. Home Entertainment Group, DC Entertainment and Warner Bros. Animation, the direct-to-video Superman: Unbound animated feature is now available to own on Blu-ray Combo Pack and DVD, On Demand and for Download.

Continuing, the Superman: Unbound home video release also includes a look at the next DC Universe Animated Original title, Justice League: The Flashpoint Paradox. Click on the thumbnails below to view a selection of images from the “A Sneak Peek at Justice League: The Flashpoint Paradox” featurette available on all Superman: Unbound home video releases. The following images are exclusive to The World’s Finest and are not to be removed without permission or credit given.