San Diego Comic-Con schedule details for the events slated for Friday, July 20, 2013 have been released by the convention’s association, including the panel dedicated to the upcoming Justice League: The Flashpoint Paradox animated film and the DC Universe Animated Original Movie home video line. Slated to hit shelves July 30th, 2013, the animated feature is based on the recent DC Comics mini-series event “Flashpoint,” which resulted in the creation of the publisher’s current “The New 52” publishing initiative. Please note that scheduled times and dedicated panels are subject to change. The convention is held every year, focusing on host of different genres and pop culture events. Further convention schedule details can be found at the official San Diego Comic-Con website. Details for the panel can be found below. 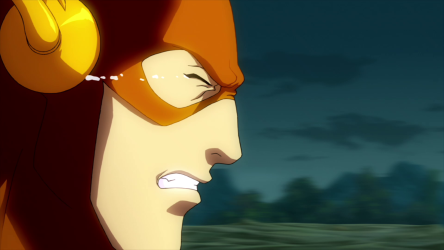 Warner Bros. Home Entertainment, DC Entertainment, and Warner Bros. Animation invite you to be the first to experience Justice League: The Flashpoint Paradox, the highly anticipated next entry in the ongoing series of DC Universe Animated Original Movies. When time travel allows a past wrong to be righted for Flash and his family, the event’s temporal ripples prove disastrous, creating a fractured alternate reality where the Justice League never formed, and even Superman is nowhere to be found. Amidst a new world being ravaged by a fierce war between Wonder Woman’s Amazons and Aquaman’s Atlanteans, Flash must team with a grittier, more violent Batman and government agent Cyborg to restore the continuity of Flash’s original timeline. Come for the film, but stay for the star-studded panel that features Grey’s Anatomy stars Justin Chambers and Kevin McKidd as Flash and Batman, respectively, along with C. Thomas Howell (Southland), Cary Elwes (The Princess Bride), Sam Daly (The Daly Show), and a few surprise voice cast members, plus the filmmaking team of producer James Tucker (Superman: Unbound), director Jay Oliva (Batman: The Dark Knight Returns), dialogue director Andrea Romano (Batman: The Dark Knight Returns), screenwriter Jim Krieg (Green Lantern: The Animated Series), and character designer Phil Bourassa (Young Justice). Moderator Gary Miereanu will add to the fun with a special announcement of the 2014 DCU movie slate, as well as exclusive, cast-autographed prizes for a few lucky fans. Based on the landmark mini-series by Geoff Johns and Andy Kubert, Justice League: The Flashpoint Paradox will be available as a digital download on July 19 and a Blu-ray Combo Pack on July 30.

Stay tuned for further updates and more here soon at The World’s Finest, including exclusive content and much more