hosted by popgeeks.com | The One Ring RPG Review – This Free League Publishing RPG is our PreciousRUINSMAGUS Comes To VR July 7
Close
Skip to content
Menu 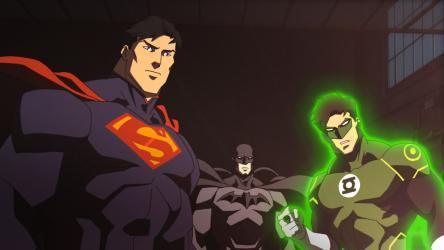 When asked to summarize Justice League: War, Tucker said the feature was “everything you ever wanted” in a Justice League movie. Oliva called it a “loose adaptation” of the Geoff Johns “Justice League: Origin” storyline and will feature the origin of Cyborg. Romano said the character of Cyborg goes through plenty of distress but comes out “shining.” Miereanu also confirmed that Aquaman is not in Justice League: War, but will get a spotlight in an upcoming DC Universe Animated Original Movie title.

Discussing his new role as the voice of Batman, O’Mara said it was a “thrill and an honor,” and never expected to get the call. O’Mara said he grew up with Batman and felt very pressured, and especially concerned, about the fan reaction to his performance. O’Mara said he was worried fans would say “bring back Kevin Conroy,” and joked that Conroy choked him when they first met. O’Mara said his turn as Batman is just one version, the New 52 version, of the multifaceted franchise.

Tucker added that DC Comics’ The New 52 initiative will serve as the blueprint for the home video franchise going forward beginning with Justice League: War. Going into detail, Tucker said characters will meet for the first time, get thrown into new situations for the first time, and so forth. More original stories will also be coming in the future to the DC Universe Animated Original Movie line. Oliva added that character designs by Young Justice‘s Phil Bourassa going forward will still be iconic, but take influence from the recent The New 52 character redesigns by Jim Lee. Justice League: War will also establish an ongoing continuity with most – but not all – upcoming titles in the DC Universe Animated Original Movie line.

During the question and answer segment of the panel, a few new details from the Justice League: War came about, along with details on other upcoming titles.

-Shazam was added to the line-up of the Justice League: War, as suggested by Geoff Johns, to help bring some levity to the dark, gritty animated movie. Some of Shazam’s backstory will be included in the movie, with Tucker adding people will be surprised by how he fits into Justice League: War.

-When asked if there were cameos or teases for upcoming animated movie storylines hinted in Justice League: War, Oliva said “maybe.”

-When asked how The New 52 will evolve the DC Universe Animated Original Movie’s continuity, Tucker said The New 52 will be a jumping-off point to tell more modern-day stories. The movies will keep the “flavor” of The New 52, though won’t sync up entirely.

-Tucker said there will be “Elseworlds”-type ‘things’ coming down the line, though did not specify the exact format. Oliva added that “Superman: Red Son” and “Batman: Gotham by Gaslight” were discussed as possible future titles.

-As for adapting assorted Vertigo Comics titles, Tucker said some have been “considered,” and certain characters may make their way into future DC Universe Animated Original Movie titles now that some Vertigo characters have been folded into The New 52 continuity.

-The panelists confirmed that interest remains in a Batman Beyond animated feature, and that Bruce Timm “has an idea.”

George Newbern was also announced as the voice of Steve Trevor in Justice League: War.