WaterTower Music has released initial details and cover artwork for the upcoming Justice League: War – Original Motion Picture Soundtrack release. The soundtrack, featuring music by Kevin Kliesch, will be available as both a Digital Download, via assorted digital retailers, and an Amazon.com-exclusive Compact Disc beginning February 4th, 2014. The Digital Download will be priced at $8.99 and the Compact Disc at $9.99. The soundtrack is being released to coincide with the home video release of the DC Universe Animated Original Movie title Justice League: War, also hitting shelves on February 4th, 2014. The animated movie, based on the popular “Justice League: Origin” comic book storyline, will be available on DVD, Blu-ray and Digital Download from Warner Bros. Home Entertainment.

Soundtrack cover art and track listings can be found below. 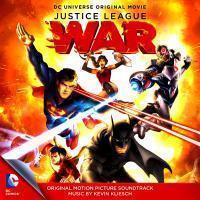 Details for the Justice League: War home video release can be found at the The World’s Finest Justice League: War subsite. Click on the thumbnail below to view the trailer in the MP4 720p Quicktime format, with additional formats available by clicking the links under the image.