Warner Bros. Home Entertainment has announced actor Shemar Moore will be part of the West Coast Premiere for the Justice League: War animated feature, set for January 30th, 2014 at the Paley Center for Media in Los Angeles. Justice League: War is an adaptation of the “Justice League: Origin” storyline recently published by DC Comics, written by Geoff Johns with artwork by Jim Lee and Scott Williams, which kicked off the comic publisher’s current ongoing “The New 52” comic-line initiative. The animated feature will arrive on Blu-ray Combo Pack, DVD, and Digital Download come February 4th, 2014 courtesy of Warner Bros. Home Entertainment. Justice League: War features the formation of the Justice League and the team’s first battle with Darkseid. Continue below for more details and a new image of Moore and his animated alter-ego Cyborg. 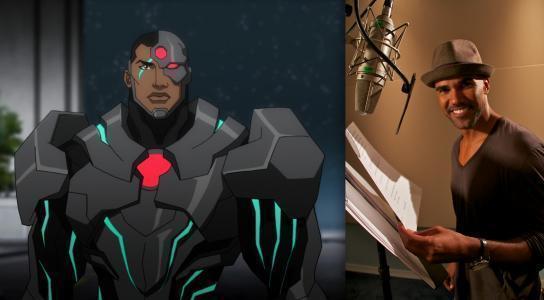 Moore provides the voice of Cyborg, an integral character whose origin story is revealed over the course of the film. Justice League: War, the next entry in the popular, ongoing series of DC Universe Animated Original PG-13 Movies, will be distributed by Warner Bros. Home Entertainment on February 4, 2014.

While the event is completely sold out, there are a few giveaway opportunities on the horizon. Fans should stay tuned to their favorite DC-centric websites later this week for a chance at a special ticket giveaway.

About Justice League: War …
When the powerful Darkseid and his massive, relentless forces invade Earth, a group of previously unaligned super heroes – misunderstood and, in some cases, hunted by the authorities – discover the only way to fend off the attack will be to work together as a cohesive unit. Batman, Superman, Wonder Woman, Green Lantern, Flash, Shazam and, in his origin story, Cyborg combine their respective talents in an all-out battle to save the planet. Based on the 2012 graphic novel, “Justice League: Origin,” by Geoff Johns & Jim Lee, Justice League: War provides a glance into the world before the Justice League was created, and offers the initial animated incarnation of DC Entertainment’s “The New 52.”