Warner Bros. Home Entertainment has provided the trade ad and trailer for the upcoming Teen Titans Go! – Season Two, Part One: Appetite For Disruption two-disc DVD collection, hitting shelves April 14th, 2015. The DVD title will feature 26 11-minute episodes from the second season of the popular animated comedy series. Teen Titans Go! follows the comedic adventures of the teenage superhero team as they deal with what happens between the major battles. MSRP for the two-disc DVD release is $19.97.

Click on the player to view the trailer. The trade also be found below.

The trade ad and initial details are as follows. 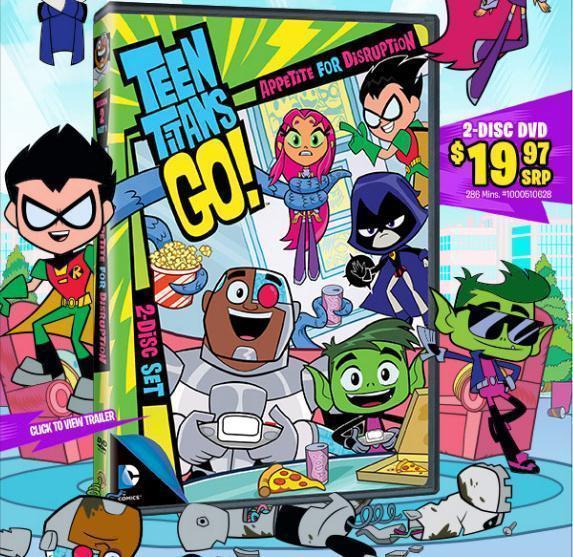 Synopsis: Robin, Starfire, Raven, Beast Boy and Cyborg return for a wacky second season of all-new, comedic adventures, in Teen Titans Go! Season 2. A spin-off of the 2002 breakout blockbuster hit from Warner Bros. Animation, Teen Titans Go! follows everyone’s favorite super heroic teen team of Robin, Cyborg, Raven, Starfire and Beast Boy in all new, comedic, 11-minute adventures highlighting the hijinks they get into when they aren’t out saving the world. In between the big fights with super villains, the team’s dynamic and personalities ensures that even down time at the Tower or a trip to the movies promises extreme (and extremely funny) fun.

The episodes featured in this two-disc set include “The Best Robin,” “Thanksgiving,” “Halloween,” “Friendship,” “Knowledge,” among many others.

Click here for a closer look at the cover art, for reported here at The World’s Finest.

Please note these details, including street date, are subject to change. Details on possible bonus content is still to be announced. The two-disc Teen Titans Go! – Season Two, Part One: Appetite For Disruption DVD collection, featuring the first 26 11-minute episodes from the second season of the hit comedy series, hits shelves April 4th, 2015 from Warner Bros. Home Entertainment for MSRP $19.97.