Burbank, Calif. – Girls now have their very own Super Hero world, DC Super Hero Girl, where they can play, watch, read and be inspired to discover their full super power potential alongside legendary DC Comics female Super Heroes, including Wonder Woman, Supergirl and Batgirl, in this all-new universe that was created just for them.

DC Entertainment and Warner Bros. Consumer Products, in partnership with Mattel, announced today the activation of many elements to this highly anticipated initiative, including the rollout of the new DCSuperHeroGirls.com website, which kicks off with the U.S. launch today. A global rollout of the digitally immersive world will begin later this month.

The new DCSuperHeroGirls.com site today debuts the first webisode, of a series of animated digital shorts, titled “Welcome to Super Hero High” that was created by the award-winning Warner Bros. Animation Studio, in partnership with Mattel’s Playground Productions. Today’s launch features a pantheon of DC Comics characters that have been brought to life in a completely new artistic style and aesthetic, through immersive videos, games, quizzes, character photos, bios and more.

In the coming weeks and months the new website will be regularly updated with new animated digital content and previews of upcoming products slated for 2016. In conjunction with the website launch, DC Super Hero Girl will have a dedicated presence across a number of social media platforms, including exclusive DC Super Hero Girl YouTube, Facebook and Instagram accounts, to cater to social media savvy girls and their parents. 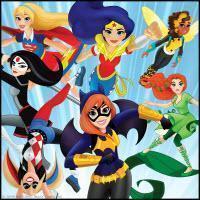 “DC Entertainment has a deep and rich roster of strong female characters – both heroes and villains – that have inspired and empowered girls and young women for decades. From the iconic Wonder Woman and Supergirl, to the complex but compelling Harley Quinn and Catwoman, there is a character to whom every girl can relate, no matter what stage of life in which she currently finds herself,” said Diane Nelson, President of DC Entertainment and President and Chief Content Officer of Warner Bros. Interactive Entertainment. “Girls want to experience the strength, action and optimism of Super Heroes too, and DC Super Hero Girl is part of our long-term strategy to offer a diverse array of strong female characters in a fun and action-packed universe, and through a world of epic storytelling on a variety of entertainment platforms. We could not be more excited and proud to debut today’s first phase of the important new universe for girls.”

DC Super Hero Girl will take New York Comic Con by storm as girls and their parents, along with all DC Comics fans, attending NYCC October 8-11 will be the first to see elements of the initiative and experience a variety of activities, including a behind-the-scenes panel session, a look at upcoming products and much more. Fans will also get a sneak-peek at Mattel’s upcoming product line, including first-ever 6” action figures designed for girls and 12” scale action dolls featuring strong, athletic bodies that stand on their own in heroic poses.

Activities at NYCC will include a dedicated DC Super Hero Girl booth within the Javits Center’s Crystal Palace, where fans on-site can get a close-up look at the action dolls and a sneak-peek at additional products within the DC Super Hero Girl world. NYCC attendees will also have the opportunity to participate in unique giveaways and photo opportunities. There will be a dedicated panel on Thursday, Oct. 8 at 5:30pm (Room 1B03) where the creative women behind-the-scenes of DC Super Hero Girls will share their vision for the universe. Panelists include:

“It is exciting to finally bring DC Super Hero Girl to life with all our partners who have helped create an immersive world based on this groundbreaking franchise that will allow girls and kids to engage and experience this Super Hero universe like never before,” said Brad Globe, President, Warner Bros. Consumer Products.

Additional Key Partners
Books based on the DC Super Hero Girl are also a key component of the program. Random House Children’s Books is the global master publishing partner and will create a portfolio of middle-grade novels that will bring the DC Super Hero Girl universe to life, offering all-new stories that will expand the world from what is featured in the animated content. At NYCC, Random House will unveil a portion of the first book of the middle-grade novel series, titled Wonder Woman at Super Hero High, by distributing 3-chapter samplers of the title, along with fun DC Super Hero Girl bookmarks, throughout the weekend.

DC Entertainment has also secured writer Shea Fontana to create the inaugural original graphic novel. Scheduled for release in July 2016, the young Super Heroes are kidnapped by a teenage Lex Luthor the day before Super Hero High’s semester finals. Together, they must combine their Super Hero powers to defeat Luthor and race back to school before final exams begin.

Additionally, consumer products partners around the globe are engaged in creating a merchandise program dedicated to DC Super Hero Girl across all key categories.

Developed with girls ages 6-12 in mind, DC Super Hero Girl centers on DC Comics characters during their formative teen years at Super Hero High. DC Comics’ icons including Wonder Woman, Supergirl, Batgirl, Harley Quinn, Bumblebee, Poison Ivy, and Katana are featured in storylines that explore being a unique teen, including discovering their super powers, nurturing friendships and mastering the fundamentals of being their own hero. Other DC Comics Super Heroes attending Super Hero High include Hal Jordan, Beast Boy, The Flash, and many more.

About DC Entertainment
DC Entertainment, home to iconic brands DC Comics (Superman, Batman, Green Lantern, Wonder Woman, The Flash), Vertigo (Sandman, Fables) and MAD, is the creative division charged with strategically integrating its content across Warner Bros. Entertainment and Time Warner. DC Entertainment works in concert with many key Warner Bros. divisions to unleash its stories and characters across all media, including but not limited to film, television, consumer products, home entertainment and interactive games. Publishing thousands of comic books, graphic novels and magazines each year, DC Entertainment is one of the largest English-language publishers of comics in the world.

About Mattel
The Mattel family of companies (Nasdaq: MAT) is the worldwide leader in the design, manufacture and marketing of toys and family products. Mattel’s portfolio of best-selling brands includes Barbie®, the most popular fashion doll ever produced, Hot Wheels®, Monster High®, American Girl®, Thomas & Friends® and Fisher-Price® brands, including Little People® and Power Wheels®, MEGA® Brands, including MEGA BLOKS® and RoseArt®, as well as a wide array of entertainment-inspired toy lines. In 2013, Mattel was named one of the “World’s Most Ethical Companies” by Ethisphere Magazine and in 2014 ranked No. 5 on Corporate Responsibility Magazine’s “100 Best Corporate Citizens” list. With worldwide headquarters in El Segundo, Calif., Mattel’s companies employ nearly 30,000 people in 40 countries and territories and sell products in more than 150 nations. At Mattel, we are Creating the Future of Play. Visit us at www.mattel.com, www.facebook.com/mattel or
www.twitter.com/mattel.

All DC characters and elements are trademarks of and © DC Comics. Super Heroes is a trademark co-owned by DC Comics. (s15)