Warner Bros. Home Entertainment has officially announced an upcoming special re-release of the acclaimed 2009 Wonder Woman animated movie. Wonder Woman presents a fresh spin on the origin of the classic DC Comics icon, and is heralded as one of the best DC Universe Animated Original Movie titles. Details for the upcoming Wonder Woman: Commemorative Edition release, hitting digital outlets on May 2nd, 2017 and Blu-ray and DVD on May 16th, 2017, can be found below. The trailer for Wonder Woman: Commemorative Edition can be viewed in the player below.

WARNER BROS. HOME ENTERTAINMENT HONORS THE ICONIC CHARACTER
WITH THE RE-RELEASE OF ONE OF THE BEST REVIEWED ANIMATED FILMS
IN THE HISTORY OF THE DC UNIVERSE ORIGINAL MOVIES

Return to the realm of Amazonian warriors, Greek gods and mythological creatures – all unleashed on modern civilization – as Warner Bros. Home Entertainment honors the world’s greatest female super hero with the release of Wonder Woman: Commemorative Edition. The feature-length, PG-13 rated animated film, one of the best-reviewed entries in the decade-long history of the DC Universe Original Movies, will be distributed on Digital HD on May 2, 2017 and on Blu-rayTM Combo Pack and DVD on May 16, 2017.

On the mystical island of Themyscira, a proud and fierce warrior race of Amazons have raised a princess of untold beauty, grace and strength – Diana. When U.S. fighter pilot Steve Trevor crash-lands on the island, the rebellious and headstrong Diana defies Amazonian law by accompanying Trevor back to civilization. Meanwhile, Ares (the God of War) has escaped his imprisonment at the hands of the Amazonians and has decided to exact his revenge by starting a World War that will last for centuries and wipe out every living being on the planet, starting with the Amazons. It is up to Diana to save her people and the world – by using her gifts and becoming the ultimate Wonder Woman! 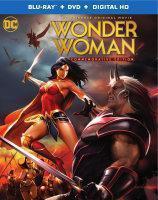 ENHANCED CONTENT
-Featurette – What Makes A Wonder Woman: For 75 years, Wonder Woman has resonated with audiences because of her loving nature and quest for truth. Hear some of her biggest fans and fellow creators discuss how her qualities have crafted her into the icon we know today.
-Sneak Peek – Batman and Harley Quinn: Sneak peek at the next DC Universe Original Movie, Batman and Harley Quinn, featuring the talented filmmakers and voice cast.
-Creative Team Commentary: Scene and film analysis by producers Bruce Timm & Gregory Noveck, director Lauren Montgomery and screenwriter Michael Jelenic.
-Featurette – Wonder Woman: A Subversive Dream – A definitive look at a psychologist’s dream, and the rich history of one of the pillars of DC Comics.
-Featurette – Wonder Woman: Daughter of Myth – This revealing documentary explores the archetype and tradition of the female DC Comics Super Hero.

About Digital HD
Digital HD allows fans to watch a digital version of their movie or TV show anywhere, on their favorite devices. Digital HD is included with the purchase of specially marked Blu-ray discs. Digital HD allows consumers to instantly stream and download movies and TV shows to TVs, computers, tablets and smartphones through UltraViolet retail services like CinemaNow, Flixster, VUDU and more. For more information on compatible devices go to wb.com/ultravioletdevices. Consult an UltraViolet Retailer for details and requirements and for a list of HD-compatible devices.

WONDER WOMAN and all related characters and elements are trademarks of and ©DC Comics.

Further details on the Wonder Woman animated feature – including a wealth of images, interviews and behind the scenes content, as well as reviews – can be found at The World’s Finest Wonder Woman subsite. To discuss this news, click on the link below.