Revealed during the San Diego Comic-Con 2019 Batman: Hush World Premiere panel, Warner Bros. Home Entertainment announced three DC Universe Movie titles slated for 2020, which include an adaption of the acclaimed Superman: Red Son Elseworlds story, a new Justice League Dark adventure, and an original Superman animated feature. Following Batman: Hush, now available on Digital HD and coming to physical media and the DC Universe streaming on August 6, 2019, the next entry in the DC Universe Movie line is Wonder Woman: Bloodlines. Details on that title will be released in the coming weeks. Continue below for DC Comics’ official release.

A Superman: Red Son Animated Movie is On the Way

It’s a maxim known to comics and superhero fans worldwide. Superman fights for “truth, justice and the American way.” But what if baby Kal-El’s ship left Krypton just a little bit earlier than it did, and rather than crashing down in Kansas, Kal landed in the middle of 1950s-era Russia?

Such is the intriguing idea behind Superman: Red Son, the seminal graphic novel by Mark Millar, Dave Johnson and Killian Plunkett that serves as the inspiration behind 2020’s first DC Universe Movie. Announced this evening at San Diego Comic-Con during the Batman: Hush World Premiere panel, Superman: Red Son will kick off next year’s three-movie lineup, which also includes an original Superman tale and a sequel to one of DC’s 2017 animated films.

The DC Universe Movies are a long-running, critically acclaimed series of animated films featuring the heroes and villains of DC that generally target more sophisticated and mature superhero fans. Boasting a mix of comic book adaptations and original stories, they’ve proven to be an enduring success with DC readers, who year-after-year attend the movies’ World Premiere screenings at conventions like Comic-Con and WonderCon and engage in watchalongs of earlier movies on the DC Universe digital service.

Superman: Red Son will likely continue the success of recent DC Universe Movies, while also exposing newer fans to one of the Man of Steel’s most memorable storylines. Originally released in 2003, Superman: Red Son is considered one of the defining Elseworlds storylines—DC’s line of comics set outside regular continuity which place familiar heroes like Superman, Batman and Green Lantern in new, drastically different settings and scenarios. Set in the thick of the Cold War, Red Son introduces us to a Superman who landed in the USSR during the 1950s and grows up to become a Soviet symbol that fights for the preservation of Stalin’s brand of communism. Other popular Superman characters play key roles, notably Lex Luthor, who from an American perspective can be seen as the hero of the story.

This will be the first Superman: Red Son movie, though Millar’s storyline did get a loose adaptation this season on The CW’s Supergirl, when a Supergirl clone was revealed to have been found and trained in Kaznia under the influence of Lex Luthor. While the details of the animated take on the comic are still to be revealed, it’s likely to adhere much closer to the source material than the Supergirl storyline. 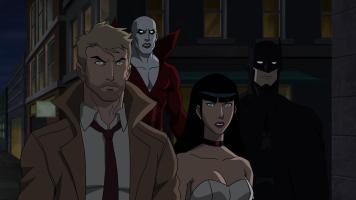 Spring will see the release of Justice League Dark: Apokolips War, a follow-up to 2017’s successful Justice League Dark. One of DC’s few R-rated animated movies, Justice League Dark saw Batman helping to assemble a team of occult and magic-based heroes to combat a series of supernatural attacks. Featuring the likes of John Constantine (who was voiced by Matt Ryan), Zatanna, Swamp Thing, Deadman, Etrigan and Black Orchid, the 2017 movie blended heroics with horror, bringing some of the darker corners of the DC Universe to a broader audience.

While it’s unsure which heroes will be returning for Apokolips War, the title suggests we might be seeing some of Jack Kirby’s New Gods, meaning it likely has some pretty big stakes for the ongoing DC Universe continuity.

The 2020 DC Universe Movie slate will then wrap up with a standalone film called Superman: Man of Tomorrow, making this the first time two Superman-centered DC Universe Movies will be released in the same year. Unlike Red Son, Man of Tomorrow will be a fully original story featuring a young Superman early in his career. We’ll have to wait for additional details on what we can expect from this one, including who the villain or villains of the movie may be and what other characters may appear alongside the Man of Steel.

Finally, it’s worth noting that along with the three full-length animated movies, 2020 will also bring us several animated “DC Showcase” shorts, which will be included with the films as bonus content. Announced earlier this year, the shorts feature Sgt. Rock, Adam Strange, Death, The Phantom Stranger and an adaptation of Batman: Death in the Family (which will hopefully help soothe any Batman fans who are bummed that the Dark Knight isn’t getting a movie next year).

Further details are expected to be released in the coming months for all four upcoming DC Universe Movie titles, including cast details, release dates and trailers. Stay tuned to The World’s Finest for more content, images, videos and exclusive content.