Warner Bros. Home Entertainment has released the trailer for the upcoming Lego DC: Shazam – Magic and Monsters direct-to-video animated feature. The title will hit Digital on April 28, 2020, followed by a release to DVD and Blu-ray on June 16, 2020. The Blu-ray Combo Pack for Lego DC: Shazam – Magic and Monsters will include an exclusive Shazam minifigure, while supplies last. Check out the trailer in the player below, along with official press details for the animated movie.

Youth, truth and trust are central to the latest brick-tastic adventure when DC’s Justice League welcomes its newest – and youngest – member in , an all-new, full-length animated feature film in the LEGO DC series. Produced by Warner Bros. Animation, DC and the LEGO Group, the film will be distributed by Warner Bros. Home Entertainment on Digital starting April 28, 2020, and on Blu-ray Combo Pack ($24.98 SRP) and DVD ($19.98 SRP) on June 16, 2020. 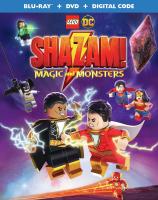 In Lego DC: Shazam – Magic and Monsters, 10-year-old Billy Batson shouts a single word and, with lightning bolts flashing, he transforms into Shazam!, a full-fledged adult Super Hero. It doesn’t take long for Superman, Wonder Woman, Batman and the rest of the Justice League to take notice and invite the earnest do-gooder to join the team. But to become a member, Billy must reveal his true identity. While fighting off the evil Mr. Mind and Black Adam, Billy learns that he must trust others – and that nothing creates trust like helping those in need. Join the good fight with this giant-sized LEGO DC adventure!

Lego DC: Shazam – Magic and Monsters will also be available on Movies Anywhere. Using the free Movies Anywhere app and website, consumers can access all their eligible movies by connecting their Movies Anywhere account with their participating digital retailer accounts.

ABOUT MOVIES ANYWHERE™
Movies Anywhere is a digital movie platform that enables movie fans to discover, access, and watch their favorite digital movies in one place. Movies Anywhere brings together a library of nearly 7,500 digital movies from Sony Pictures, Twentieth Century Fox Film, The Walt Disney Studios (including Disney, Pixar, Marvel Studios and Lucasfilm), Universal Pictures (including DreamWorks and Illumination Entertainment) and Warner Bros., and will continue to expand the consumer experience as more content providers, digital retailers and platforms are added. By connecting participating digital retailers that include Amazon Prime Video, the Apple TV app, FandangoNOW, Google Play, and Vudu, movie fans can now bring together their digital movie collections (whether purchased or redeemed) in one place and enjoy them from the comfort of their living rooms, and across multiple devices and platforms, including Amazon Fire devices; Android devices and Android TV; Apple TV, iPhone, iPad and iPod touch; Chromecast; Roku® devices and popular browsers. Movie fans can also redeem digital codes found in eligible Blu-ray and DVD disc packages from participating studios and enjoy them through Movies Anywhere. Movies Anywhere – your movies, together at last. 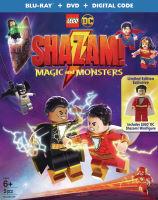 About The LEGO Group
The LEGO Group is a privately held, family-owned company with headquarters in Billund, Denmark, and main offices in Enfield, USA, London, UK., Shanghai, China, and Singapore. Founded in 1932 by Ole Kirk Kristiansen, and based on the iconic LEGO® brick, it is one of the world’s leading manufacturers of play materials. Guided by the company spirit: “Only the best is good enough”, the company is committed to the development of children and aims to inspire and develop the builders of tomorrow through creative play and learning. LEGO products are sold worldwide and can be virtually explored at www.LEGO.com. For more news from the LEGO Group, information about our financial performance and responsibility engagement, please visit http://www.LEGO.com/aboutus.

© Warner Bros. Entertainment Inc. DC SUPER HEROES and all related characters and elements are ™ of and copyright DC Comics. LEGO, the LEGO logo, the LEGO Minifigure figurine and the Brick and Knob configurations are trademarks and/or copyright of the LEGO Group. All rights reserved.

About DC
Home to iconic brands DC (Superman, Batman, Green Lantern, Wonder Woman, The Flash), DC Vertigo (Sandman, Fables) and MAD, DC is the creative division charged with strategically integrating across Warner Bros. and WarnerMedia. DC works in concert with many key Warner Bros. divisions to unleash its stories and characters across all media, including but not limited to film, television, consumer products, home entertainment, and interactive games. Publishing thousands of comic books, graphic novels and magazines each year, DC is one of the largest English-language publishers of comics in the world. 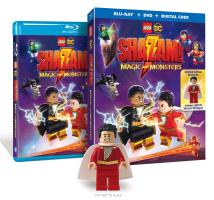