DC Comics has released preview images and a publisher-conducted interview for Batman: The Adventures Continue, a digital-first mini-series based on Batman: The Animated Series. The series, co-written by animated alums Paul Dini and Alan Burnett with artwork by Ty Templeton, will feature stories taking place following the events of The New Batman Adventures. The first digital issue of series will be available April 1, 2020, with a print edition currently slated for May 2020. Continue below for press content and artwork from the series.

Batman: The Adventures Continue
Offers a Return to the Animated World 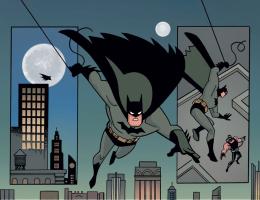 Batman: The Adventures Continue is exactly what it sounds like: a return to the seminal world of Batman: The Animated Series, with new comic book stories starring the Dark Knight and his familiar allies and villains – plus characters from the wider DC Universe introduced to the beloved animated setting for the first time, including Azrael and Deathstroke.

Batman: The Adventures Continue is co-written by Paul Dini and Alan Burnett, both producers of the acclaimed animated series, and illustrated by Ty Templeton, who has brought the world of Batman: The Animated Series to comic books since 1992’s Batman Adventures #1.

With Batman: The Adventures Continue debuting digitally this week, all three creators discussed the new series with DC Nation and what it was like returning to the world that shaped a generation of Bat-fans.

When does Batman: The Adventures Continue take place, relative to the last time we saw these versions of the characters? Has time passed, or does it pick up pretty much where things left off?

Paul Dini: It’s pretty much a continuation. Fans familiar with the Batman of The New Batman/Superman Adventures will be right up to speed. Alan and I approached the writing with the idea we were doing the season you might have seen if we had not put the series aside to do Batman Beyond.

Alan Burnett: What is different, however, is that we’re going back to cover certain gaps in the original series, events that didn’t have a bearing on the series at the time, but now do. In other words, there will be secret histories that will turn Batman’s world upside-down. Things that no one knew were out there, until now.

Deathstroke makes his debut here in the Batman: The Animated Series world. How much fun is it to get to play with that character, in this context?

Ty Templeton: Deathstroke is one of DC’s enduring hero/villains. I’ve always loved his design and his history with the Titans, which makes him part of Dick Grayson’s history, which makes him part of the Bat-World. Slade is kind of a “Batman-but-with-guns” type of character, only with a very different moral code. That kind of tension, where characters have different approaches to similar problems, is always a fun undercurrent to play with.

Dini: It was fun to come up with a first encounter between him and Batman and rework his character and motivations in a way that made sense of the animated series at that time. We’ve also given him someone new to interact with, a female protégée named Sunny – yes, her name is ironic. She’s sort of a Batgirl gone way wrong. 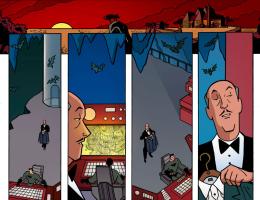 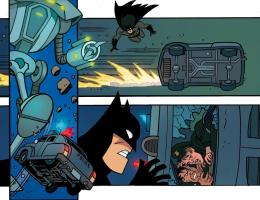 Any other new/surprising additions you’re able to tease?

Burnett: You are going to see quite a few of the villains we used in the old Batman series, some making just bit appearances, but there will be a definite sense of that animated world. We even allude to certain episodes, such as one in which Robin befriended a little lost girl, who turned out to be part of Clayface. She comes back for a page or two in these comics.

But perhaps the most intriguing character in the run will be young man whose story threads through most of the issues. He’s a smart, super-elusive loner who knows way too much about the Dark Knight. How this mystery man fits into the world of Batman Adventures and what he means to accomplish should, I hope, be a real jolt for old fans.

Dini: We’re bringing in Azrael and showing how a version of him could fit into this world. A number of old favorite adversaries are coming back: Clayface, Mad Hatter, Roxy Rocket, and that’s just in issue #2. There are plenty more surprises down the road.

There is so much fan love for this series – how meaningful is it to you to see how Batman: The Animated Series and its associated titles have endured?

Burnett: It’s wonderful how it’s endured. I think the reason it has is because we all loved Batman back on the animated series, and took the best from the comic books. We really respected all the creators that went before us, and fans knew that. So now here we are 25 years later getting back into it again, and we’ve been having a terrific time from page one. How great is that?

Templeton: There’s never been so accessible, so accurate, so “right” a version of Batman on film as those original episodes and movies. It’s been an honor to help this talented team bring some level of that world onto the pages at DC.