Warner Archive, Warner Bros. Home Entertainment’s specialty manufacture-on-demand label, announced the first two seasons of the Harley Quinn animated series will be available February 16, 2021 on Blu-ray. The first season of the animated series is already available on DVD, with the second season hitting that format also on February 16, 2021 from Warner Bros. Home Entertainment. Continue below for press details and cover art from the forthcoming release. 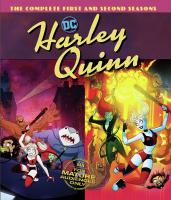 Harley Quinn (Kaley Cuoco) has finally broken things off once and for all with the Joker (Alan Tudyk) and attempts to make it on her own as the criminal Queenpin of Gotham City in this half-hour adult animated action-comedy series. With the help of Poison Ivy (Lake Bell) and a ragtag crew of DC castoffs, Harley tries to earn a seat at the biggest table in villainy: the Legion of Doom. Don’t worry – she’s got this. Or does she? In Season 2, Harley has defeated the Joker, and Gotham City is hers for the taking…what’s left of it, that is. Her celebration in the newly created chaos is cut short when Penguin, Bane, Mr. Freeze, The Riddler and Two-Face join forces to restore order in the criminal underworld. Calling themselves the Injustice League, they’re intent on keeping Harley and her crew from taking control as the top villains in Gotham.

About Warner Archive Collection
Warner Archive Collection (WAC) continues to serve as host to some of the most beloved films, television series and animated entertainment in history – and many are now available on Blu-ray. WAC’s canon runs the gamut from restored and remastered Blu-ray classics such as The Thing From Another World, The Big Sleep, The Thin Man, She Wore a Yellow Ribbon, Days of Wine and Roses and Yankee Doodle Dandy to adored TV offerings such as The Jetsons and Jonny Quest (on Blu-ray), Step by Step and Crazy Ex-Girlfriend (on DVD) to theatrical animation on Blu-ray, including the remastered and restored Popeye The Sailor: The 1940s Volumes 1-3 and Batman: Mask of the Phantasm, to animated TV series headed by Blu-ray releases such as Teen Titans: The Complete Series, Justice League Unlimited, Batman: The Brave and the Bold and Young Justice, as well as a wealth of classic animated series on DVD including dozens of Hanna-Barbera classics. WAC offerings can be found via warnerarchive.com and your favorite online retailer.

Harley Quinn: The Complete First And Second Seasons, which collects the first 26 episodes of the acclaimed series, arrives February 16, 2021 on Blu-ray from Warner Archive. The first two seasons of Harley Quinn are also currently available to view on the HBO Max streaming service, with a third season slated for 2021. For more, click here to check out The World’s Finest review of Harley Quinn‘s first season. Stay tuned for select Harley Quinn coverage right here at The World’s Finest. Discuss this news at the link below.