The Death and Return of Superman – Review

Synopsis: The Death and Return of Superman finds Superman in a fight to the finish when the Man of Steel becomes the only hero who can stand in the way of the monstrous creature Doomsday and his unstoppable rampage. Superman saves the planet, but not himself, leaving Earth’s citizens – and his heroic contemporaries – dealing with a world without Superman. The aftermath of Superman’s death, and the subsequent disappearance of his body, leads to a new mystery – is Superman still alive? The question is further complicated when four new super-powered individuals – Steel, Cyborg Superman, Superboy and the Eradicator – emerge to proclaim themselves as the ultimate hero. In the end, only one will be able to proclaim himself the world’s true Superman. 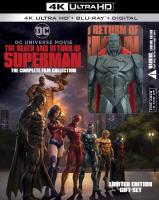 Click above to view more The Death of Superman images!

Bringing together the animated The Death of Superman and Reign of the Supermen movies into one “seamless” single feature, The Death and Return of Superman offers up solid, albeit slightly uneven retelling of the classic comic story-line. The scope of the movie now matches the scale of the story itself and remains just as interesting from start to finish, making it likely viewers won’t mind the nearly three-hour run time. For those interested in owning the DC Universe Movie adaption of The Death of Superman in its best possible format and presentation, this edition fits that bill nicely.

Just to note, this review will focus on the overall presentation of The Death and Return of Superman, and not so much on the minute details of the film. For a closer look at the two separate movies that make up this feature, check out the in-depth The World’s Finest reviews of the The Death of Superman and Reign of the Supermen animated features.

Spelling out the film’s story right in its title, The Death and Return of Superman recounts the monumental end to the Man of Steel and the emergence of four mysterious “Supermen.” The majority of the audience likely knows how this story plays out, but this specific iteration throws in a few surprises to keep things mostly interesting for the duration. There’s an obvious drive by the creative team to make sure the original Superman storyline is given its proper due, and they succeed for the most part.

For this version, as great as it is to watch these two movies as one narrative, this presentation unfortunately doesn’t solve any issues from the two films themselves. There is a lack of detailed character development in The Death of Superman that does hinder some of the film’s emotional stakes, and the relationship between Clark Kent and Lois Lane moves fairly fast, making it play out like it needs to hit specific story beats as opposed to organic progression. And as great as it is to see Superman’s supporting cast represented, it feels like it’s a little too late for us to get really attached to these iterations. When it comes to Reign of the Supermen, it remains a solid, if a little clunky. While the changes it made when adapting the original comic storyline to the DC Universe Movie line is understandable, some of the story choices made – like how it handles the Justice League’s presence, remains underwhelming. That said, it’s still a satisfying wrap-up to the story.

The Death and Return of Superman also includes some new bits of animation, including additional footage during Superman’s opening fight with Intergang, two scenes to extend Superman and Lois Lane’s flight to The Daily Planet, Superboy meeting Lex Luthor when he first escapes the cloning lab, a quick scene with the Teen Titan and a scene with Wonder Woman mourning Superman’s death. That’s in addition to a host of small dialogue and timing tweaks. Most viewers won’t likely notice much of the new content, but it’s there and it gives the movie a bit of an extra polish.

An unexpected surprise of viewing The Death and Return of Superman in the extended length, single-feature format was how it actually changes the overall context of the story and, ultimately, the experience. Superman’s devastating battle isn’t the epic finale (not that it really was in the comic either, admittedly), but merely the halfway point of a bigger story. And the transition between The Death of Superman and Reign of the Supermen mostly works, though isn’t as smooth as hoped. A series of quick vignettes play out, with a smidgen of new animation, but they don’t really flow from and to the movies surrounding them. 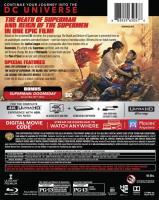 While not as smooth as Batman: The Dark Knight Returns (previously released as Batman: The Dark Knight Returns, Part One and Batman: The Dark Knight Returns, Part Two before being reissued as a single narrative feature), The Death and Return of Superman is still a success. Both films work perfectly well together even if the transition from one to the next isn’t entirely slick. The single presentation also recontextualizes the movie in a way that actually makes revisiting it in this format more than worthwhile. The two-part movie also just works better as one story. We know Superman isn’t dead and it’s interesting to see the fallout and the building mystery, even if the film fumbles the handover from the The Death of Superman portion to the Reign of the Supermen portion.

The Death and Return of Superman is definitely an enjoyable, lengthy adaptation of the classic Superman comic event that hits much, much more of the right notes then the wrong. It also feels like the preferred way to experience this animated adaptation. Watching the story unfold as it was originally presented, as two separate features, does work just fine, but this version just plays out better. In choosing between the two available viewing options for this animated adaptation of this classic Superman saga, this edition feels like the better way to go to enjoy it as it was intended. Highly Recommended!

Continuing, Warner Bros. Home Entertainment has offered up a sizable home media release for The Death and Return of Superman, which includes not only a bonus movie tossed in as a bonus feature, but a hefty new featurette, as well. Coupled with porting over the original extras from the original The Death of Superman and Reign of the Supermen home media releases, there’s actually a good chunk of extra material here coupled with another solid 4K presentation. The movie is available on 4K Ultra HD Blu-ray, Blu-ray, DVD and Digital.

Reviewing the 4k Ultra HD Blu-ray edition of The Death and Return of Superman, the audio and video transfer, much like the original The Death of Superman and Reign of the Supermen releases are solid. The upscaled 2K transfer looks great, with the colors really popping thanks to the HDR encoding. The Blu-ray looks good, too, but the 4K Ultra HD edition really pops in comparison. The transfer also appears to be mostly free of macroblocking and color banding, with no real distractions. For the audio, the DTS-HD Master Audio 5.1 transfer nicely balances the quieter dialogue moments with the big show-stopping action beats. It’s a balanced, crisp and clear presentation.

The new featurette included with The Death and Return of Superman is the nearly 46-minute “Long Live Superman,” which explores the impact of the Man of Steel in our world, his history and endurance in pop culture and the recent Action Comics #1000. The featurette covers a lot of ground, going beyond just the standard fluff EPK feature to a genuinely interesting exploration of what this character means. The featurette covers a host of the character’s differing portrayals, movies and shows included, and we get to hear from a plethora of notable Superman creators, both involved in recent animated iterations and those who’ve worked on the comics throughout the decades. It’s a fantastic watch and worth the cost.

Also included is a 4K Ultra HD edition of Superman: Doomsday and it looks pretty sharp. While there is a bit of banding, it’s easily the best this movie has ever looked or sounded. It’s a fantastic little bonus that Warner Bros. Home Entertainment didn’t need to include but did anyway. Very cool.

For thoughts on the ported over content, check out the reviews for The Death of Superman and Reign of the Supermen home media releases. The 4K Ultra HD edition also includes a Blu-ray copy of the movie, along with a digital one, and a small collection of trailers.

Once again, Warner Bros. Home Entertainment is releasing a limited edition gift set edition with a mini figurine, which is a nice reward for those consumers supporting the physical releases of the DC Universe Movie titles. Steel gets the spotlight here.

Overall, The Death and Return of Superman is definitely worth picking up. The main feature itself is an entertaining ride, with only a few minor bumps, worth the price of admission alone, and a solid helping of bonus content only sweetens the deal. A lengthy, interesting look into the legacy of Superman plus an entire extra movie is a nice surprise. Naturally, the 4K Ultra HD Blu-ray is the best looking edition, but both the Blu-ray and iTunes releases look fairly solid. If you’re looking for the best presentation for The Death of Superman and Reign of the Supermen, you’ve found it. Highly Recommended!


Please note Warner Bros. Home Entertainment provided The World’s Finest with a copy of this release to review, though that had no impact on the product’s final assessment.

Click above to view more Reign of the Supermen images!

[ Check out the subsites for The Death of Superman and Reign of the Supermen for more coverage! ]