Description: Inspired by the worldwide video game sensation now celebrating its 30th anniversary, Mortal Kombat Legends: Snow Blind finds vicious, power-mad Kano determined to take over Earthrealm, one soul at a time. Assisted by a trio of cold Black Dragon mercenaries, he embarks on a brutal assault from town to defenseless town. The choice is simple: Kneel or be annihilated. But when the cocky and talented but undisciplined Kenshi doesn’t take a knee, Kano and his clan destroy the young warrior, taking his eyesight and his confidence. Under the tutelage of reluctant, retired Kuai Liang, the only one powerful enough to challenge the malevolent Kano, Kenshi finds renewed hope and a clear path to redemption. But will it be enough to stop Kano from decimating all of Earthrealm? 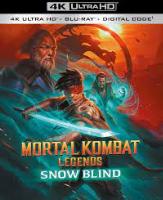 4K Ultra HD Blu-ray Combo Pack, Blu-ray Combo Pack and Digital
Special Features
-Kenshi: From the Video Game to Mortal Kombat Legends: Snow Blind – An in-depth exploration of fan favorite Kenshi Takahashi from his video game origins to his first sword-wielding animated appearance.
-Adapting Evil: Building the Black Dragon Clan – From King Kano to the evil ensemble of Mortal Kombat’s deep cut characters, the filmmakers reveal the approach to bringing the sinister Black Dragon Clan to life.
-Deleted Animatics – Get a behind-the-scenes look at a few intriguing scenes that were included in the initial assembly of the film, but didn’t quite make it to the final cut.
-Audio Commentary – Join producer/director Rick Morales and screenwriter Jeremy Adams for a feature-length audio commentary revealing the creative choices used to bring the all-new animated feature to the screen. 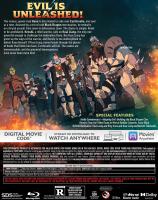 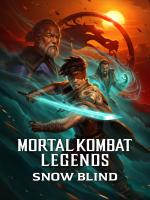 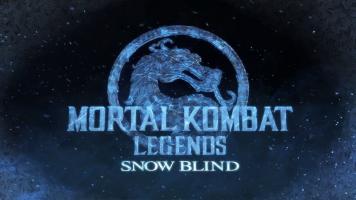 The heroes have lost, but a new face arrives in the Wastelands to set things right in Mortal Kombat Legends: Snow Blind, the third and possibly best installment yet of the animated movie line. While the action remains as vicious and brutal as ever, some of Mortal Kombat Legends: Snow Blind‘s best blows come, arguably and unexpectedly, from its legitimately surprising story choices. Still, those risky twists and turns pay off, making this ferocious actioner one legendary journey worth taking.

A vicious, power-mad Kano is determined to take over Earthrealm in Mortal Kombat Legends: Snow Blind, embarking on a brutal assault from town to defenseless town with his Black Dragon Clan mercenaries. When the cocky and talented but undisciplined Kenshi doesn’t bend to Kano’s will, the vicious killer and his clan nearly kill the young warrior. Under the tutelage of a retired and reluctant Kuai Liang, Kenshi finds hope and a clear path to redemption, but that might not be enough to win the day.

Supposedly set some time after the events of Mortal Kombat Legends: Battle of the Realms, here Outworld finds itself in tatters and constantly under threat by Kano and The Black Dragon Clan, his gang of cyber mercenaries. Mortal Kombat Legends: Snow Blind positions itself as a post-apocalyptic epic, a world stripped of hope and under tyrannical rule, akin to something out of Mad Max or even Fist of the North Star, mixed with hints of Yojimbo and A Fistful of Dollars. Under the skilled eye of director Rick Morales, it’s a different take from the adventures we’ve come to expect from the still-burgeoning Mortal Kombat Legends animated movie line, pushing the series in an interesting direction. While it’s still arguably based (very lightly) on the Mortal Kombat 11 video game, and even if the movie’s premise isn’t entirely new, it still feels pretty novel.

The script by Jeremy Adams makes the entire premise of Mortal Kombat Legends: Snow Blind feel like the believable next step for the fighting franchise. The story of a fighter seeking redemption in a world searching for hope is, somewhat surprisingly, a neat take that really works well in the Mortal Kombat universe. Even the whole post-apocalyptic setting could be something of a cliche at this, but it works (and even makes sense) as the next stage for Mortal Kombat‘s story, at least here in the animated movie line.

Mortal Kombat Legends: Snow Blind opens with a brutal attack sequence where The Black Dragon Clan decimate an outpost. It’s a real show-stopper, setting the tone and establishing the new rules of the Wasteland while also catching up Mortal Kombat Legends viewers on what seems to have transpired since 2021’s Mortal Kombat: Battle of the Realms. It’s a gruesome and excessively bloody start, one well-executed with just enough teases to whet the viewer’s appetite and establish the movie’s “hero.” 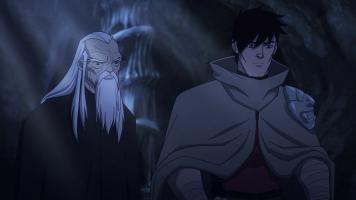 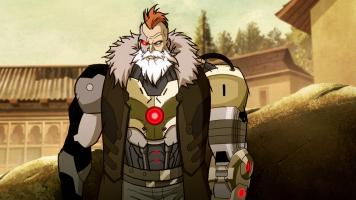 Using Kenshi as Mortal Kombat Legends: Snow Blind‘s central character is also a clever touch. His story from the video game series gets a pretty solid retelling here, with a few small but expected changes. Kenshi is still blinded by the well of souls after being tricked by Shang Tsung, but the circumstances have been changed a little bit to fit into Mortal Kombat Legends: Snow Blind‘s story. Putting the focus on Kenshi is itself a neat change of pace, since he’s a well-known and fan-favorite character who doesn’t frequently get the spotlight, also helps Snow Bind stand out a little more from its predecessors. That said, some of the more popular characters from the Mortal Kombat do appear, though, with a couple playing a key role in the film’s big climactic blow-out.

As with the previous two Mortal Kombat Legends titles, expect to see lots of familiar faces here, but they just might not be in the role you expect. Kensi, Shang Tsung and Kano are joined here by, Scorpion, Kabal, Tremor, Kuai Liang and Kobra, among more than a few others. Mortal Kombat Legends: Snow Blind gives us an idea of what could happen should the heroes of Earthrealm ever lose the tournament, and it’s pretty compelling to see just that unfold. That said, some viewers might be turned off by how unlike a “normal” Mortal Kombat movie Mortal Kombat Legends: Snow Blind actually is, or at least what some viewers would expect it to be. Still, while there’s no major tournament to be found here, the fate of the world still comes satisfyingly down fisticuffs.

The approach to Mortal Kombat Legends: Snow Blind‘s story may not be the film’s biggest change. Instead, arguably the movie’s biggest whammy is the revamped visual style. Character designs are given a more simplified, cartoonier look (for lack of a better term) and Mortal Kombat Legends: Snow Blind just looks “cleaner” overall in comparison to the two previous Mortal Kombat Legends installments (even the recent Injustice animated feature used the former stylistic approach), which seems to be the result of Todd Gibbs being added as art director and shepherding the film’s design work. Or, also quite possibly, it’s simply for budgetary reasons. Gone is the blockier, shadow-heavy and detailed design work, here replaced with more simplified looks and thick edges, though still with a bit of a scratchy and “rough” edge. It’s honestly a shade jarring at first, since the previous design approach to these movies looked great, but quickly becomes a non-issue. Don’t let it become a distraction.

Animation quality is solid, as well, with only the odd hiccup. The smoother animation style works great here, serviced well by the efforts of Digital Emation. Despite snippets of occasional jerky or stilted animation, Mortal Kombat Legends: Snow Blind looks really good, even with it’s visually apparent limited budget. Fight scenes are energetic, unflinching and usually slick and fluid, accompanied by bloody visual flourishes and special effects. They do lack the grit and dirt of the two previous Mortal Kombat Legends films but the fisticuffs here work just as fine, and are just as excessively gory. And, even though this third installment carries a different look to it than the other Legends movies, the film’s cast remains just as recognizable. 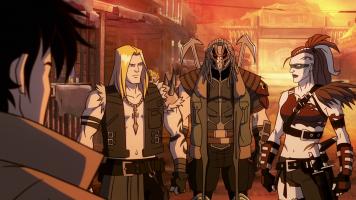 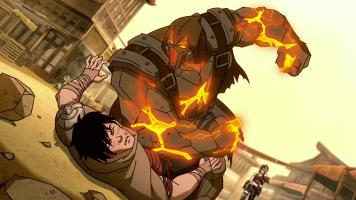 A swath of returning actors to the franchise also helps to breed a little familiarity. Led by Manny Jacinto as the humbled, struggling Kenshin, he’s joined by previous players including David Wenham as Kano, Patrick Seitz as Scorpion and Artt Butler as Shang Tsung – all of whom are clearly enjoying their return to the Wasteland. Notable new additions include, but not limited to, Yuri Lowenthal  as Kobra, Ron Yuan as Kuai Liang and Sumalee Montano as Kindra.

A bloody good time, Mortal Kombat Legends: Snow Blind shakes up the Legends formula and takes the series somewhere new. It’s not just another tournament battle to decide the fate of Earthrealm, but instead a more character-driven piece where the stakes may just be the biggest they’ve ever been. It’s a risky idea but it absolutely works, especially as some of the plot’s latter twists come to light. Even the most skeptical of Mortal Kombat fans should eventually appreciate what Mortal Kombat Legends: Snow Blind sets out to do.

And, after giving Mortal Kombat Legends: Snow Blind a watch, there’s still a good chunk of bonus content included with the film’s assorted home media releases, courtesy of Warner Bros. Home Entertainment. Special features include “Kenshi: From the Video Game to Mortal Kombat Legends: Snow Blind,” which covers the character’s history from the games to the small screen, “Adapting Evil: Building the Black Dragon Clan,” which looks this movie’s take on the Black Dragon Clan to life, deleted animatics and an audio commentary. As with previous Mortal Kombat Legends releases, there’s actually a fine amount of extra material, with stand-out again being the included audio commentary. Available on both the included 4K Blu-ray and regular Blu-ray discs, producer/director Rick Morales and screenwriter Jeremy Adams, it’s another great listen that’s full of neat and funny anecdotes about the film’s production and the even the Mortal Kombat franchise as a whole. Available in multiple formats, for the best presentation, the 4K Ultra HD release the way to go, though the regular Blu-ray edition is a good alternative.

Offering up a different approach to the Mortal Kombat mythos, Mortal Kombat Legends: Snow Blind takes the animated movie line in an admittedly captivating direction. While the movie’s plot remains respectful to the franchise, it does something a little different than expected, and successfully so, and it’ll be interesting to see the direction the franchise takes. Even with the occasional missteps, the animation and designs look and run smooth, allowing for some impressive (and exceptionally bloody) action beats and a suitably over-the-top finale. Hitting all the expected marks while mixing in some cool, newfangled ideas, Mortal Kombat Legends: Snow Blind comes Highly Recommended!

Please note Warner Bros. Home Entertainment provided The World’s Finest with a copy of this title to review. The author did purchase a copy of the film on iTunes for completion and comparison purposes. 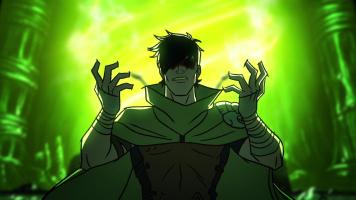 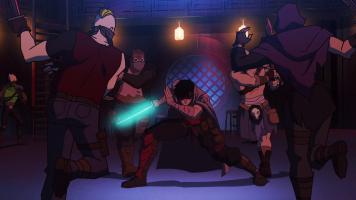 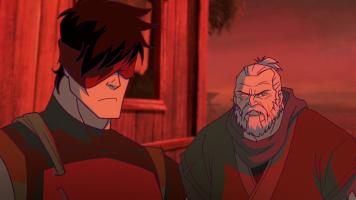 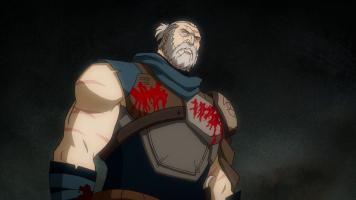 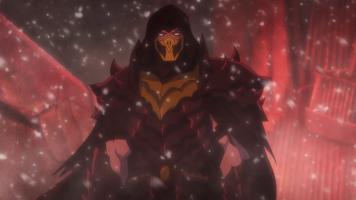 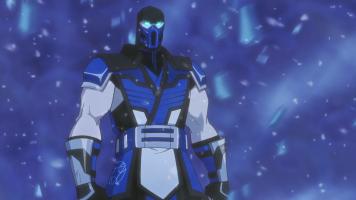 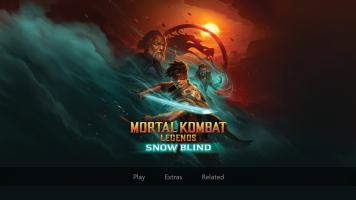 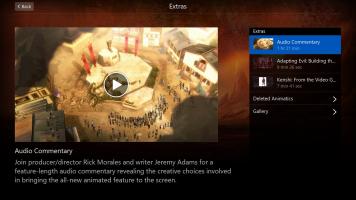