A representative for The World’s Finest attended the recent 2013 Denver Comic-Con and covered the Young Justice panel, which featured assorted cast and crew members from the late Cartoon Network animated series and its’ spin-off comic book. Members of the panel included producer Greg Weisman, actor Dee Bradley Baker, artist Chris Jones, actor Khary Payton , and actor Phil LaMarr. The 2013 Denver Comic-Con was held earlier this month, and featured an assorted of talent from the entertainment industry, including comic creators and members from the animation field. For a rundown of the panel, continue below.

The Young Justice panel at Denver Comic Con was standing room only, packed to the walls it seemed. Given the high level of attendence of cosplayers, when Greg Weisman called for all those in Young Justice character costumes to stand up, the percentage of those cosplayeres was rather impressive. The panel was staffed by Weisman (Producer), Dee Bradley Baker (Actor), Chris Jones (Comic Artist), Khary Payton (Actor), and Phil LaMarr (Actor).

For the most part, the panel became a large Question & Answer session. 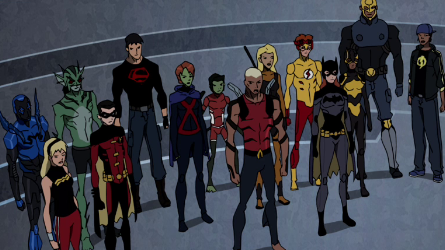 When asked what he thought of the “My Show Must Go On” Kickstarter campaign, Weisman responded that it is obviously a very well-intentioned attempt, but that Warner Brothers won’t let it get anywhere. “There are these things called ‘lawyers’…” commented Jones.

Weisman was asked “How much work is it to produce an episode,” and he responded with a litany of steps. They need to plot out the season first, then write the episodes, then do the voices, then send it to Korea for animation, then do the music and final edits, re-recordings. And sometimes the actors’ schedules don’t mesh well, so they do placeholders so the actors come in and do the lines later.

When asked about his choice of Robins, Weisman answered that he felt it was important to start with Dick Grayson as Robin, and evolve to Tim Drake. He took a lot of flack from Young Justice fans for that decision, but Weisman felt that rather than be a strict adaptation of the comic Young Justice, they were really working with an entire history and legacy which were critical to the story.

Weisman also pointed out Phil Bourassa’s character design work, and designing three completely different and distinct character treatments for Dick, Tim, and Jason Todd – all of them Robin, but clearly distinguishable from each other.

The question “What do we need to do to get cartoons for an adult audience?” was posed to the entire panel, with an emphasis on how to perhaps get more Young Justice. The general answer given was unless you have a Nielsen Box, the best way is to keep the conversation about the show alive is to buy Young Justice products (“After you pay for things like, y’know, rent,” quipped one of the panel members). Other responses handed out included getting more people to watch the show via DVD and iTunes, buy the upcoming soundtrack, and buy the heck out of the Young Justice: Legacy video game. Weisman said that merchandising sales is a large part of a show’s operational budget. He also added that physical letters, sent via the post office, carries weight. “Anyone can shoot off an email, but a physical letter shows real investment for the show.,” he said.

When asked about the series finale, Weisman said that he and Brandon Vietti were offered a chance to take out the final scene in the second season finale, but declined in order to let the show end with a dramatic note.

The panel wrapped up with panelists listing off who they considered their favorite characters on the series:

-Weisman said they are all his “children,” but he had the most fun writing G. Gordon Godfrey, mainly because of Tim Curry’s delivery.
-LaMarr said Aqualad.
-Payton also noted Aqualad as his favorite, and told the audience he sometimes would catch himself doing the Aqualad voice at odd times, and then recited the beginning of Jabberwocky in Aqualad voice.
-Chris Jones said he was just happy that his design for Ubu was adapted for the show.

Thanks to David Medinnus for attending and covering the panel!