The trailer for the upcoming series premiere of Beware The Batman is now available to view, courtesy of Cartoon Network and Warner Bros. Animation, by clicking the image below. The new CG-animated series, which features a radical new take on the famed super-hero, is set to debut July 13th, 2013 at 10am (ET/PT) as part of the DC Nation programming block on Cartoon Network. Continue below to view the trailer in a host of definitions in the MP4 format. Expect additional updates to this post shortly. 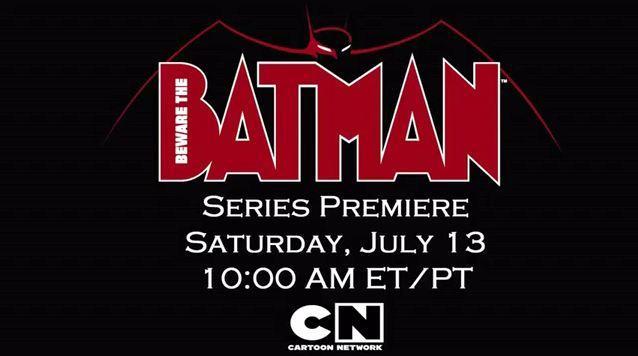 480P — 720P — 1080P
Beware the Batman incorporates Batmans core characters with a rogues gallery of new villains not previously seen in animated form. Along with backup from ex-secret agent Alfred and lethal swordstress Katana, the Dark Knight faces the twisted machinations of Gotham Citys criminal underworld led by the likes of Anarky, Professor Pyg, Mister Toad and Magpie. Produced by Warner Bros. Animation, this action-packed detective thriller deftly redefines what we have come to know as a Batman show. Featuring cutting-edge CGI visuals to match the intricate twists and turns of the narrative, Batman steps out of the shadows and into the spotlight for an entirely new generation of fans. With WBAs Sam Register executive producing, and Batman Beyonds Glen Murakami and Scooby-Doo! Mystery Incorporateds Mitch Watson producing. Anthony Ruivivar will star as Bruce Wayne/Batman in Beware The Batman, with Sumalee Montano as Katana, J.B. Blanc as Alfred Pennyworth, and Kurtwood Smith featured as Lt. James Gordon.

Beware the Batman is set to debut July 13th, 2013 at 10am (ET/PT) as part of the DC Nation programming block on Cartoon Network. Stay tuned for further updates, including exclusive content and more, here soon at The World’s Finest.

Coverage Of The “Young Justice” Panel At The Denver Comic-Con 2013 New Images, Official Announcement For “Beware The Batman” Series Debut