DC Comics has officially announced details for the October 2014 issue of Teen Titans Go!, the bi-monthly all-ages comic series from DC Entertainment. The Teen Titans Go! comic book title, based on the Cartoon Network ratings hit of the same name, collects two 10-page stories per issue. Each 10-page story is initially released monthly exclusively through digital outlets, including the DC Comics’ online store and Comixology, before being published for print every two months. Details for the upcoming print issue of Teen Titans Go! can be found below. 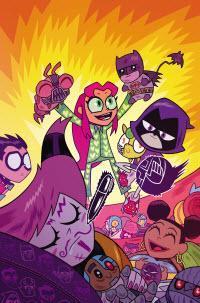 What happens when the girls have a slumber party and don’t invite any of the boys? What about when Cyborg and Beast Boy plug their sweet new game console into the Tower’s mainframe computer? We’re glad you asked – but did you really think we’d give it away?!

Continuing, DC Comics has also released details for the upcoming new The Batman Adventures trade paperback collection. The new Batman Adventures, Volume One collection will early include issues from the classic, critically-acclaimed 1990s comic series based on Batman: The Animated Series. Official details can be found be found below.

The first ten issues of the classic all-ages series are back in a new collection! Don’t miss these tales of the Dark Knight featuring appearances by The Joker, The Penguin, Catwoman, Scarecrow, Killer Croc, Clayface, The Riddler and more!

Batman Adventures, Volume One, a ten-issue trade paperback collection from DC Comics, is slated to hit shelves come November 2014 for $19.99US. Details on the The Batman Adventures comic book series can be found at The World’s Finest Batman: The Animated Series subsite.