The World’s Finest caught up with Batman: The Brave and The Bold Producer James Tucker to discuss the latest episode of the acclaimed animated series, “Sword of the Atom!” The all-new episode debuts Friday, September 30th, 2011 at 6:00pm (ET) on Cartoon Network. The episode spotlights Aquaman, Ray Palmer, and Ryan Choi. Continue below for the all-new Batman: The Brave and The Bold Q & A. 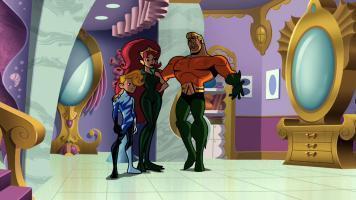 The World’s Finest: Aquaman returns to the spotlight in “Sword of the Atom!” Were you surprised by the reaction by how this interpretation of Aquaman has been received? Why do you think its caught on so much with the fanbase?

James Tucker: I wasnt that surprised by the fan reaction to Aquaman because I knew when John DiMaggio first voiced the part as written by Joe Kuhr that we had cracked the code on what made this version of Aquaman work. We werent trying to make him a bad-ass, we just wanted him to be a likeable, good-humored, warm-hearted, big lug but who was also a dedicated father, king and hero. In other words, we made him a real person and gave him a strong and distinct personality that audiences could relate to . The other great thing about Aquaman is hes a superhero that knows hes a superhero. Hes not ashamed of wearing tights and standing with his arms akimbo. He knows thats just part of the job description and I think audiences were ready for a superhero character who wasnt all gray morally and complicated. I always wanted our show to kind of feel like comfort food for a world going through hard times, in the best tradition of real family shows with simple, easy to know characters that you want to spend a half hour with in your home.

WF: Sword of the Atom! features a new musical number. Can you give us a rundown of the song, where the inspiration comes from? Will this be the last musical number we see?

JT: Michael Jelenic,the shows co-producer, wanted to do a teaser that was based around an old school 60s-70s sitcom featuring Aquaman and family. I thought it was a nutty idea (like many of Michaels ideas!) but then I realized that every old school sitcom had a theme song, so then I got on board with the idea. The song was a parody of the openings to The Addams Family and a short lived sitcom called The Pruitts of South Hampton with a touch of McHales Navy thrown in. I wrote it and then Michael McCuistion came up with the music for it that gave it the proper nautical feel. I think it turned out to be a hummable hoot!

WF: The episode features both the original Atom Ray Palmer and the new one Ryan Choi. What is distinctly different about these two Atoms?

JT: Ryan is different from Ray in our universe because we imply that he was recruited to be a superhero whereas Ray chose to be The Atom. Ray is a very standard do-gooder type hero, Ryan thinks of himself as a scientist first and a very reluctant hero second. One of the things I loved about working on this show was being able to present the legacy aspect of DC Comics in a coherent way to non comic book fans. The fact that these superheroes are often the family and friends of superheroes that came before them and that theres honor in carrying on the legacy of a superhero name really appealed to me. I think we managed to do it in an understandable and hopefully entertaining way. 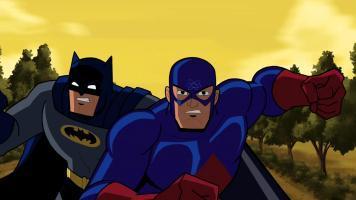 WF: Palmer finds himself in a rather strange adventure without spoiling too much, are there any specific inspirations for Palmers miniature-sized adventures? What about the montage of Batman/Atom cases?

JT: The only thing I can say that isnt too spoilery is that the inspiration is loosely based on the Sword of the Atom story from a while ago where Ray Palmer goes native. We took a lot of liberties with it but I think we kept the tone intact. The montage of Batman/Atom cases at the start of the episode helps contextualize the new hero were introducing to audiences who arent familiar with. Its something we also did in the Barry Allen Flash centered episode that worked really nicely. The main reason though is that we get to throw in a bunch of easter eggs in the form of villains and it was just a lot of fun for us personally to be able to fit all those characters into an episode.

WF: So, to wrap this up, what type of challenges do our heroes face in this episode? Give us a couple teases as we head into the latest adventure!

JT: The episode is basically about a hero lost, a hero being found and a hero finding himself. Basically Heart of Darkness with giant spiders! Its chock full of the usual Batman: The Brave and the Bold action and laughs courtesy of the comedy gold that Ryan Choi and Aquaman team!