Warner Home Video has revealed that the annual WonderCon convention will see the debut of Superman Versus The Elite, the Summer 2012 DC Universe Animated Original movie release. The 2012 WonderCon, one of the country’s top comics and pop culture conventions, will be held at Anaheim, California and the Anaheim Convention Center for the weekend of March 16 – 18, 2012. The World Premiere of Superman Versus The Elite will be held on March 16th, 2012 at 6:30pm (ET) on the Third Level Ballroom. The following details for the event are as seen below. 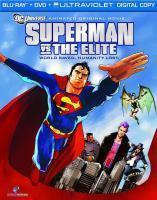 Be among the first to see the latest release from the popular series of DC Universe Animated Original PG-13 Movies when Warner Home Video, Warner Premiere, DC Entertainment, and Warner Bros. Animation present the World Premiere of Superman Versus The Elite. In the film, Superman’s effectiveness as a superhero comes into question when a new group of super-powerful crusaders, known as “The Elite,” appear on the scene. As superheroes, the Elite know no bounds and are more than willing to kill, even on a massive scale, to stop villainy — putting them on a collision course with the ever-ethical, preferably nonlethal Man of Steel. The voice cast is led by George Newbern (Father of the Bride), reprising his Justice League/Justice League Unlimited role as Superman, NCIS star Pauley Perrette as Lois Lane, and versatile voice actor Robin Atkin Downes (Batman: Year One, Star Wars: The Clone Wars) as Manchester Black, the leader of The Elite. Award-winning comics writer Joe Kelly has adapted his original story from the heralded Action Comics #775 (“What’s So Funny About Truth, Justice & the American Way”) into a script directed by Michael Chang (Batman: Brave and the Bold) and executive produced by Bruce Timm (Batman: Year One). See the film, then stay for the panel, where members of the filmmaking team and voice cast will take questions from moderator Gary Miereanu and the audience. Prizes will be awarded, and new details about future DC Universe films will be revealed! Ballroom, Third Level

Superman Versus The Elite is the first DC Universe Animated Original Movie to be directed by Michael Chang. Additionally, this is also Joe Kelly’s first work for the popular direct-to-video animated feature line.