The CG-animated series Beware The Batman will move up thirty minutes on Adult Swim’s Toonami programming block starting Saturday, October 4th, 2014. The cartoon’s new timeslot will be Saturday nights at 2:00am (ET/PT), the change due to a program shift in the fan-favorite block found on Cartoon Network’s counterpart channel Adult Swim. The timeslot change was confirmed by the network. The series, while not the highest-rated program in the massive programming block, ranks first in its timeslot among male-dominated demographics. Beware The Batman‘s current timeslot is Saturday nights at 2:30am (ET/PT). 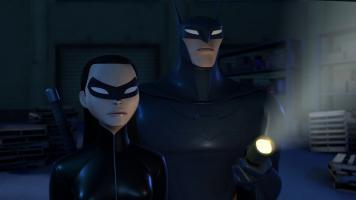 The tentative episode schedule for Beware The Batman‘s timeslot debut on October 4th, 2014 is “Unique,” followed by “Hero” on Saturday, October 11th, 2014. Beware The Batman features The Dark Knight facing off against Gotham City’s criminal underworld with backup from ex-secret agent Alfred and lethal swordstress Katana.

The CG-animated series originally aired on Cartoon Network as part of the now-defunct DC Nation programming block, but was removed from the schedule in October 2013 for unexplained reasons. After a lengthy hiatus, the show joined the Toonami programming block on Adult Swim back in May 2014, details of which can be found here. Representatives for Adult Swim state the network is committed to airing all 26 episodes.

Fans will get all the details on the most anticipated home entertainment release in fanboy history when Warner Bros. Home Entertainment puts Adam West center-stage for a Bat-tastic look at Batman: The Complete TV Series during a special Thursday, October 9 panel at New York Comic Con.

Starting at 6:45pm on the Main Stage in the Jacob Javits Convention Center, fans in attendance – and those live-streaming the panel at home – will get an inside sneak peak at all the exclusive content in this long-awaited home entertainment release, as well as dazzling HD remastered footage from the landmark series.

Batman: The Complete TV Series will be released by Warner Bros. Home Entertainment as a Limited Edition Box Set, and on Blu-ray, DVD and Digital HD, starting November 11, 2014.