In a last-minute schedule change, the Toonami programming block on Adult Swim will be airing the final seven episodes of Beware The Batman this Saturday, September 27th, 2014 starting at 2:30am (ET/PT) and running until 6:00am (ET/PT). According to representatives from Toonami, the programmers behind the block were informed early Monday, today, that Beware the Batman is being financially written off by Cartoon Network as of the end of the month. So, the programmers behind the fan-friendly Toonami programming block have decided to air all the remaining episodes before the show is no longer available for network broadcast. This comes less than a week after Adult Swim, the counterpart network for Cartoon Network, announced the Beware the Batman would be moving to an earlier timeslot.

Representatives are calling this event “one last Bat-blowout” for fans of the acclaimed, under-rated CG animated series. The show will not be part of the Toonami programming block starting October 4th, 2014. Continue below for an episode rundown of the special marathon. 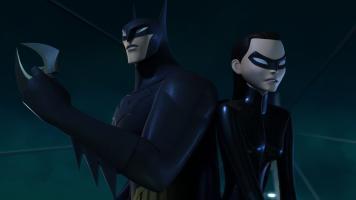 Beware the Batman “Doppelganger”
Airing at 2:30am (ET/PT) on September 27th, 2014
Batman and Katana encounter a strange Man Bat creature, who is the experimental result of Pyg and Toad’s animal army of mutated humans.

Beware the Batman “Unique”
Airing at 3:00am (ET/PT) on September 27th, 2014
An old friend of Bruce Wayne’s comes to him for help, when her father has been cloned by a mysterious organization to create an army of super soldier manhunters.

Beware the Batman “Hero”
Airing at 3:30am (ET/PT) on September 27th, 2014
Desperate to rid the city of Batman, Harvey Dent allies with Anarky, who recruits a new hero to take Batman’s place… the hired killer Deathstroke.

Beware the Batman “Choices”
Airing at 4:00am (ET/PT) on September 27th, 2014
When Batman and Katana are ambushed in the Gotham subway by Killer Croc, it’s up to Barbara Gordon to save them. Only one problem: Barbara’s on a date.

Beware the Batman “Epitaph”
Airing at 4:30am (ET/PT) on September 27th, 2014
When Bruce Wayne is “assassinated” by Batman, he lets the world think he’s dead and goes in search of the imposter – the Bad Batman.

Beware the Batman “Twist”
Airing at 5:00am (ET/PT) on September 27th, 2014
Batman continues to work in secret to find answers, while Harvey Dent recovers in Gotham Hospital. Blaming Batman for everything, he enacts martial law in Gotham.

Beware the Batman “Alone”
Airing at 5:30am (ET/PT) on September 27th, 2014
When Alfred is taken hostage by Deathstroke in the Batcave, Batman must face him alone. Harvey Dent reveals his true nature as Two-Face.

Adult Swim, representatives of which said the network was committed to airing all 26 episodes of the Beware The Batman animated series, will stay true to it’s claim thanks to this last-minute Toonami “Bat-blowout” marathon. The CG-animated series originally aired on Cartoon Network as part of the now-defunct DC Nation programming block, but was removed from the schedule in October 2013 for unexplained reasons.