Animated Batman Part Of “Batman at 75: Screenings From The Paley Center Collection”

Details on some select events can be found below, with a complete rundown available at the official The Paley Center for Media website.

Even your grandmother could name Batman’s sidekick or home base (or maybe both). The Dark Knight is arguably the world’s most popular superhero and one of the most iconic and influential fictional characters of all time. Celebrate the seventy-fifth anniversary of his first appearance, in Detective Comics #27 (May 1939) every weekend in May at the Paley Center with a wide variety of Bat-entertainment, from the cheesy propaganda of the 1943 movie serial up to today’s critically acclaimed DC Universe Animated Original Movies, including Justice League: Doom and LEGO Batman: The Movie – DC Super Heroes Unite.

12:30 pm – Justice League: Doom
This animated superhero motion picture features the Justice League of America, consisting of Batman, Superman, Wonder Woman, the Martian Manhunter, Green Lantern, Cyborg, and the Flash, as they battle the Legion of Doom, with a distinct disadvantage: the villains have hacked into the Batcomputer, which reveals how to most effectively rend each hero’s powers useless. Voiced by Kevin Conroy, Phil Morris, Olivia d’Abo, Tim Daly, Carl Lumbly, Paul Blackthorne, Nathan Fillion, and scripted by the late, great Dwayne McDuffie. (2012; 77 minutes)

3:20 pm – Batman: The Brave and the Bold “Journey to the Center of the Bat”
When villain Chemo infects Batman with an insidious “silicate” disease, Aquaman and the Atom venture within the Dark Knight’s body to stop its spread. Also featuring appearances by DC’s two super-stretchable heroes, Plastic Man and Elongated Man. (2009; 22 minutes)

Details on other Batman-related screenings – including episodes of the classic 1960s Batman television show and the 1940s Batman series – can be found at the official The Paley Center for Media website.

The Paley Center for Media, with locations in New York and Los Angeles, focuses on the discussion about the cultural, creative, and social significance of television, radio, and emerging platforms for the professional community and media-interested public. The Center plays hosts to many events throughout the month, touching upon different areas of the vast entertainment industry.

These screenings at The Paley Center for Media are part of the year-long “Batman 75” celebrations, commemorating the 75th anniversary of Batman’s first comic book appearance. More details on “Batman 75” can be found here.

Justice League: Doom
Teletoon, Friday, January 4th, 2013 at 9:00pm (ET/PT)
The Justice League consists of Earth’s finest super heroes and protectors of humanity. But in the mind of the Dark Knight, it contains potentially the most dangerous people on the planet. Over time, Batman has compiled top-secret contingency plans should any of them go rogue. When these files are stolen by a rising group of super-villains, the Justice League embarks on a collision course that will test the very fabric of its alliance. With a stellar voice cast headed by Kevin Conroy, Tim Daly and Nathan Fillion, this thrilling DC Universe Animated Original adventure will challenge what you know about the Justice League as well as redefine what heroes are made of!

Debuting three new feature-length titles in 2012, the DC Universe Animated Original Movie direct-to-video line from Warner Home Video moved nearly 1.1 million home video units during the calendar year. The above number comes from the three DC Universe Animated Original Movie titles that debuted this year – Justice League: Doom, Superman Versus The Elite and Batman: The Dark Knight Returns, Part Two – and those numbers are expected to see some growth, though likely slight, during the 2012 holiday season. Note that all numbers listed in this articles are estimated numbers only, based on research and market analysis. 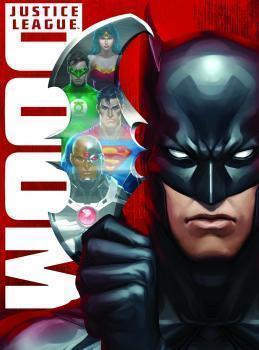 Among the three new DC Universe Animated Original Movie titles, the February 2012 Justice League: Doom animated feature has moved the most units since its release date, predictably so given it’s early in-the-year release date, moving an estimated 615,000 units combined in the DVD and Blu-ray formats since hitting shelves. The title benefited from strong word-of-mouth throughout the year, along with multiple award nominations and recognition for the work of the late Dwayne McDuffie, who penned the feature. The direct-to-video Justice League: Doom animated feature debuted to 265,000 home video units copies sold in its first week of sales, the week ending March 5th, 2012.

The second feature-length DC Universe Animated Original Movie title of the year, released Summer 2012, the direct-to-video Superman Versus The Elite animated feature has moved 206,000 units in both the DVD and Blu-ray format since its debut. The title was easily the lowest profile release in the DC Universe Animated Original Movie line for 2012, barely selling over 130,000 units combined in its first frame, the week ending June 17th, 2012. Criticism of the film’s design work resulted in negative word-of-mouth for the feature, something it was unable to overcome.

Please note the above sales numbers do not take into account rental numbers, OnDemand numbers or legal download numbers. Sales numbers are estimates gathered through independent research, market analysis and various home media retailing outlets. Additionally, sale numbers from titles released before the 2012 calendar year are not taken into account. Also remember to take into account release date and character marketability when comparing sales numbers for each title.

According to various home media retailing outlets and independent research, the recent Justice League: Doom direct-to-video animated feature made a splash on the home video market. The latest DC Universe Animated Original Movie title moved an estimated 265,000 units in its first week, with 103,000 of those sales coming from DVD and 162,000 from the Blu-ray format. Blu-ray sales accounted for nearly 62% of total Justice League: Doom home video sales in its first week, with the high-definition format easily the dominant media. These sales numbers are for the week ending March 5th, 2012, the first week of the availability for the animated title. Since its first week of sales, the title has moved an additional 125,000 copies combined in both the standard definition DVD and high-definition Blu-ray format. Keep in mind the sales numbers above do not take into account rental numbers, OnDemand numbers, or legal download numbers. Additionally, please note that the Justice League: Doom Two-Disc Special Edition release is currently exclusive to all Wal-Mart chains, though will go retail wide come April 10th, 2012.

To compare, the previous DC Universe Animated Original Movie title Batman: Year One debuted with an estimated 167,000 copies sold on DVD and Blu-ray editions sold during its debut week in October 2011. Batman: Year One was also released on with promotional tie-ins to the acclaimed Batman: Arkham City video game.

Click on the links below to discuss both the new Justice League: Doom animated feature and its respective DVD and Blu-ray home video releases.

A new video clip from Justice League: Doom, the new animated feature loosely based on the acclaimed graphic novel JLA: Tower of Babel, has been released by Warner Home Video. The clip features an intense fight between Wonder Woman and Cheetah. Click on the thumbnail image below to view the clip. Justice League: Doom is now available to own on Blu-ray, DVD, OnDemand and for Download from Warner Home Video.

Click here to read the The World’s Finest review of the Justice League: Doom Blu-ray release, along with additional content from the animated feature.