Teletoon Releases The July 2009 “Batman: The Brave And The Bold” Episode Schedule

Below are official descriptions and airdates for episodes of the Batman: The Brave and The Bold animated series slated to air next month on the Canadian network Teletoon. Please note the information listed below is provided by Teletoon.

Sunday, July 5th, 2009 – “013 Game Over For Owlman!”
On Earth, Owlman has been perpetrating crimes disguised as Batman and assembled all the villains to join him. Batman returns and teams with Joker to take Owlman down while avoiding all the heroes who are after him.

Sunday, July 12th, 2009 – “014 Mystery in Space!”
On his birthday, a melancholy Aquaman joins Batman for a space adventure on Adam Strange’s home planet of Rann where the aquatic hero washes away his birthday blues with an epic battle against the Gordanians.

Sunday, July 19th, 2009 – “015 Trials of the Demon!”
In 19th century London, Jason Blood – aka The Demon Etrigan — has been framed for supernatural attacks perpetrated by Gentleman Ghost . Batman travels back in time and teams with Sherlock Holmes to stop Gentleman Ghost before he brings a demon from the underworld to Earth.

Sunday, July 26th, 2009 – “016 Night of the Huntress!”
Blue Beetle develops a crush on the slightly older and far-more-dangers femme fatale Huntress (who kinda has a thing for Bats), but there is little time for love with Baby Face busting his gang out of prison for a major heist. 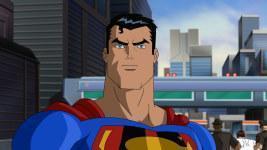 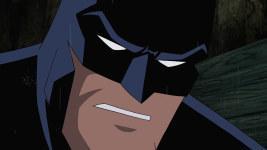 The Worlds Greatest Super Heroes become Americas most wanted criminals and are hunted by friends and foes alike in Superman/Batman: Public Enemies, the sixth entry in the popular DVD series of DC Universe Animated Original PG-13 Movies. A co-production of Warner Premiere, DC Comics and Warner Bros. Animation, the full-length animated film will be distributed by Warner Home Video on September 29, 2009. Superman/Batman: Public Enemies will be available as a Special Edition 2-disc version on DVD and Blu-Ray Hi-Def for $24.98 (SRP) and $29.99 (SRP), respectively, as well as single disc DVD for $19.98 (SRP) and On Demand. Order due date for all versions is August 25, 2009.

In the film, United States President Lex Luthor uses the oncoming trajectory of a Kryptonite asteroid to frame Superman and declare a $1 billion bounty on the heads of the Man of Steel and his partner in crime, Batman. Heroes and villains alike launch a relentless pursuit of Superman and Batman, who must unite and recruit help to stave off the action-packed onslaught, stop the asteroid, and uncover Luthors devious plot to take command of far more than North America.

–Blackest Night Featurette: Inside the DC Comics Event: Behind-the-scenes of Blackest Night, the epicDC Super Hero event in which the dead shall rise.
–A Test of Minds Featurette: Superman and Batman featurette with Jeph Loeb, giving viewers a fresh and revitalized look at the team-up of Superman and Batman working together despite their often competitive and challenging relationship.
–Dinner with DC: With Special Guest Kevin Conroy Featurette: Reprising his role from Batman: The Animated Series, Kevin Conroy joins the crew for dinner to discuss their creative approach and what the Superman/Batman team-up means.The evening will be hosted by Voice Director Andrea Romano, Producer Bruce Timm and DCs Gregory Noveck
-Extended Sneak Peak at Next DCU Film
-Digital Copy Download
-Widescreen (1.78:1)
-Two Episodes of Justice League Unlimited hand-picked by animation legend Bruce Timm

The Blu-ray release of Superman/Batman: Public Enemies will have more than three-and-a-half hours of bonus materials, including all the great extras from the 2-disc Special Edition as well as two additional episodes of Justice League Unlimited and two episodes from Justice League, both personally selected by fan-favorite Bruce Timm.

Based on the past success of Superman Doomsday and Batman: Gotham Knight, we know the pairing of the Man of Steel and the Dark Knight pitted against both their DC Super Hero colleagues and the entire rogues gallery of DC villains will offer fans the level of entertainment normally reserved for the big, summer blockbuster films, said Amit Desai, WHV Vice President of Family, Animation & Partner Brands.

This is the ultimate film for DC animation lovers featuring not only the cornerstone characters of comic book and Saturday morning heroes, but also returns the seminal voices of those characters Tim Daly, Kevin Conroy and Clancy Brown in a story that explores the Superman/Batman dynamic and allows Lex Luthor to shine in ultimate villainy, said Gregory Noveck, Senior VP Creative Affairs, DC Comics.

Marketing Support
Superman/Batman: Public Enemies will be extensively marketed with a robust national TV, Print, Radio and Online media campaign generating over 500 million impressions! The campaign will also include trailering on WHV titles to garner an additional 10 million impressions. Exciting promotions with Xbox Live, iTunes, Amazon and the Sony Playstation Network will drive strong consumer awareness and demand amongst the core fan base. Additionally, the dedicated Superman/Batman: Public Enemies website will include an enticing sweepstakes offer to drive traffic and viral activity.

SUPERMAN, BATMAN and all related characters and elements are trademarks of and DC Comics. (s09)

A representative for Warner Bros. Animation has confirmed for The World’s Finest that Clancy Brown, Kevin Conroy, and Tim Daly will be reunited in the upcoming Superman/Batman: Public Enemies direct-to-video animated feature, scheduled to hit Blu-ray and DVD in September 2009. All three actors will be reprising familiar roles.

Kevin Conroy is cast as Batman, Tim Daly as Superman and Clancy Brown as Lex Luthor in the upcoming direct-to-video animated feature based off the initial six-part “Public Enemies” storyline from the Superman/Batman comic book. All three actors have played these respective roles before, most notably in Batman: The Animated Series and Superman: The Animated Series.

An official announcement on the upcoming Superman/Batman: Public Enemies direct-to-video animated feature, scheduled to hit Blu-ray and DVD in September 2009, is expected next week. Stay tuned for further updates.

The official press information concerning the Batman: The Brave and The Bold panel at Comic-Con International: San Diego 2009, as provided by Warner Bros. Animation, is available below.

Friday, July 24th at 10am in Room 6DE
“Batman: The Brave and The Bold” Screening and Q&A
Gotham takes over San Diego as Diedrich Bader (Surf’s Up), the voice of Batman, returns to Comic-Con alongside executive producer Sam Register (Teen Titans), producer James Tucker (Justice League Unlimited), actor John DiMaggio (Futurama), producer and story editor Michael Jelenic (The Batman) and voice director Andrea Romano (Superman Doomsday). Fans can catch the world premiere screening of the upcoming Mayhem of the Music Meister episode featuring the voice of Neil Patrick Harris (Dr. Horribles Sing-Along Blog) as the Music Meister and enjoy a lively discussion and Q & A with the shows dynamic creative team. From Warner Bros. Animation, Batman: The Brave and The Bold airs Fridays at 8:30 p.m. ET /PT on Cartoon Network. Batman: The Brave and The Bold – Volume 1 will be released on DVD August 25.

A representative for Warner Bros. Animation also notes that Bat-Mite masks will be handed out at the panel.

Disney XD Takes “Superman: The Animated Series” Back To The Beginning This Month

Monday, June 29th, 2009
2:00am (ET) Superman: The Animated Series “Last Son of Krypton, Part One”
With destruction raining down on the planet Krypton, Kryptonian scientist and Council member Jor-El uses the precious remaining moments to secure superbaby Kal-El in a rocket that will spirit him to an uncertain future on Earth.

Monday, July 6th, 2009
2:00am (ET) Superman: The Animated Series “Last Son of Krypton, Part Two”
Young Clark Kent discovers the truth about who and what he is. Upon reaching adulthood, he assumes his birthright as the Man of Steel, and the legend of Superman is born in the city of Metropolis.