Revealed during the special Superman: Man of Tomorrow discussion panel at the DC FanDome 2020 virtual event, Warner Bros. Home Entertainment announced four DC Universe Movie titles are slated for release in 2021. The titles are a mix of original content and adapted material, and feature Batman and the Justice Society.

The first 2021 DC Universe Movie title will be already-announced Batman: Soul of the Dragon, an original martial arts-heavy tale taking place in the 1970s. The movie includes Bruce Timm as Executive Producer. The cast features David Giuntoli as the voice of Batman/Bruce Wayne, Michael Jai White as Ben Turner/Bronze Tiger, Mark Dacascos as Richard Dragon, Kelly Hu as Lady Shiva, James Hong as O-Sensei, and Josh Keaton as Jeffrey Burr. Click on the image below for a closer look at an image from Batman: Soul of the Dragon. 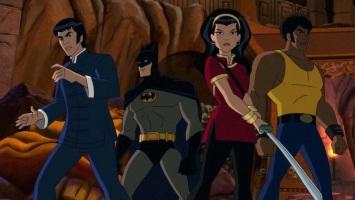 The second DC Universe Movie movie title coming in 2021 is Justice Society: World War II, which will also be an original story. The freshly-announced movie is slated for a spring release.

Lastly, the DC Universe Movie line will finish 2021 with a two-part adaptation of the acclaimed comic book mini-series, Batman: The Long Halloween. Part one will debut in the summer of 2021, with the second and final installment following in the fall. This title follows other recent extended comic book adaptations in the DC Universe Movie line, including The Death and Return of Superman and Batman: The Dark Knight Returns, both originally two separate animated titles re-released as one feature.

Official press information for Batman: Soul of the Dragon is expected in the near future.

Further details are expected to be released in the coming months for all four upcoming DC Universe Movie titles, including cast details, release dates and trailers. Stay tuned to The World’s Finest for more content, images, videos and exclusive content. Superman: Man of Tomorrow, the latest DC Universe Movie title, is available now on Digital HD and on 4K Ultra HD Blu-ray and Blu-ray Combo Pack on September 8, 2020. Click here for more.