HBO Max has announced that Batman: The Animated Series, Batman Beyond and Green Lantern: The Animated Series, among many other titles, will be joining the streaming service starting January 1, 2021. HBO Max is an American-based subscription video on demand streaming service from AT&T’s Warner Media, which owns publisher DC Comics and its characters.

Warner Media confirms that all 109 episodes of Batman: The Animated Series will be available, as will all 52 episodes of Batman Beyond and 26 episodes of Green Lantern: The Animated Series. Also confirmed is the addition of Batman Beyond: Return of the Joker. HBO Max previously added Batman: Mask of the Phantasm, Batman & Mr. Freeze: Sub-Zero, Batman & Harley Quinn back in July 2020, with Batman: Mystery of the Batwoman also recently added to the service’s library. The majority of the DC Comics-based animated content coming to HBO Max was previously available on the DC Universe streaming service, which is in the process of switching over to a comics-exclusive streaming platform starting January 2021.

Additional related titles coming January 2021 to HBO Max include the DC Showcase Batman: Death in the Family interactive animated short, the CW Seed Vixen animated series, and the DC Universe Movie titles Batman: Bad Blood, Batman: Hush, Justice League Dark: Apokolips War, Superman: Doomsday and Superman: Man of Tomorrow. HBO Max has been regularly adding DC Comics-based animated and live-action content since it launched May 27, 2020, including porting over content from the DC Universe service such as the Harley Quinn and Young Justice animated series. More content – both new and classic – is slated to be added to the service in 2021 and beyond.

Additionally, The Batman is slated to join the streaming service starting February 15, 2021. All 65 episodes plus the series’ spin-off feature will be available.

Batman: The Animated Series
When the two shots rang out, Bruce Wayne’s life changed forever. He pledged himself to justice and he held that oath for years. Wearing many names – the Dark Knight, the World’s Greatest Detective, the Caped Crusader and Gotham’s Greatest Hero – he battled tragic foes like The Joker, Penguin, Mr. Freeze and so many more. But deep inside, he knew that he shared something with them that most of humanity wouldn’t understand – a commitment to the fight. The acclaimed, Emmy-winning TV series redefined this complex man as an edgy hero struggling for revenge and redemption each time he donned the cape and cowl, and this comprehensive collection contains every episode, with all the allies, criminals and showdowns in Batman’s history.

Batman Beyond
Terry McGinnis was just an ordinary teenager…until his father was mysteriously murdered. Suspecting foul play at his father’s company Wayne/Powers Corporation, Terry meets Bruce Wayne and learns a secret identity hidden for decades. Now too old to battle injustice, Wayne refuses to help. So Terry does what any brash young kid would do: steal the Batsuit and take matters into his own hands! Vowing to avenge his father’s death, Terry dons the high-tech suit tricked out with jetpacks, a supersensitive microphone and even camouflage capabilities in search of his father’s assassin. Get in on the action from the beginning of a new partnership between an ex-crimefighter and his apprentice.

Stay tuned for continued select updates right here at The World’s Finest. In the meantime, check out The World’s Finest subsites dedicated to Batman: The Animated Series, Batman Beyond, Green Lantern: The Animated Series and The Batman, each section packaged with extensive coverage and exclusive content. Additionally, coverage of assorted DC Universe Movie and DC Showcase Animated Shorts titles can also be found on their respective subsites, here and here. Also, be sure to click the link below to discuss this news! 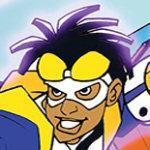 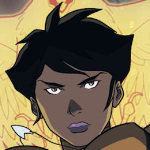 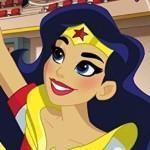 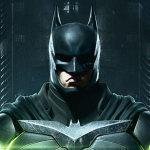 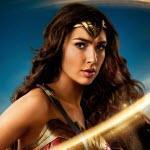 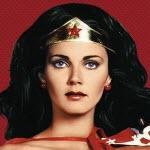 Warner Bros. Home Entertainment has issued the following press release announcing the home video release of Vixen, the animated CW Seed series, slated to hit physical and digital media come May 2017. Continue below for the artwork and press details.

Follow the Path and Discover the Mystery
Vixen: The Movie
Feature Length Film Combines Acclaimed CW Seed Shorts with New Content for
Seamless Adventure Starring Voices from The CW’s Arrow and The Flash 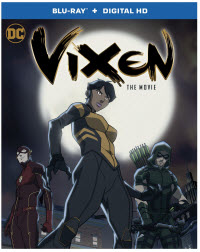 From executive producers Greg Berlanti, Marc Guggenheim and Andrew Kreisberg, Warner Bros. Home Entertainment brings you the animated feature, Vixen: The Movie, on Digital HD on May 8, 2017, and on Blu-ray (including Digital HD copy) and DVD on May 23, 2017. Vixen: The Movie is priced to own at $19.98 SRP for the Blu-rayTM and $18.94 SRP for the DVD.

Originally from Africa, Mari McCabe grew up an orphan after her parents were killed by local greed, corruption and wanton violence. But Mari refuses to succumb to the terrors surrounding her. Inheriting her family’s Tantu Totem, Mari can access the powers of animals – anything from the strength of a gorilla to the speed of a cheetah. As Vixen, she fights valiantly to protect the world from threats like those that claimed her family.

“Vixen: The Movie gives fans the action sequences and the characters that they all fell in love with in Arrow and The Flash,” said Rosemary Markson, WBHE Senior Vice President, Television Marketing. “We are very excited to release Vixen: The Movie for fans of the hit series and DC collectors, featuring never-before-seen content available exclusively to owners of the Blu-ray, DVD or Digital HD.”

With Blu-ray’s unsurpassed picture and sound, Vixen: The Movie Blu-ray release will include 1080p Full HD Video with DTS-HD Master Audio for English 5.1. The 1-disc Blu-ray will feature the Blu-ray disc and a Digital HD copy of the movie.

DIGITAL HD
Vixen: The Movie will be available to own on Digital HD. Digital HD allows consumers to instantly stream and download the film to watch anywhere and anytime on their favorite devices. Digital HD is available from various digital retailers including Amazon Video, CinemaNow, iTunes, PlayStation, Vudu, Xbox and others. A Digital HD copy is also included with the purchase of specially marked Blu-ray discs for redemption and cloud storage through participating UltraViolet retail services including CinemaNow, Vudu and Flixster Video.

About Blue Ribbon Content
Formed in 2014, Blue Ribbon Content (BRC) is Warner Bros.’ digital studio. BRC develops and produces live-action series for digital platforms, tapping the creative talent already working at the Studio while also identifying opportunities for collaboration with new writers and producers. In addition to live-action programming, BRC produces animated content and is also experimenting with emerging platforms such as virtual reality. BRC programs include the live-action comedy Now We’re Talking, an UNINTERRUPTED Original Series for go90; the live-action comedies JoJoHead and Beerfest, as well as the animated Vixen plus the upcoming Freedom Fighters: The Ray and Constantine for CW Seed; and the animated Justice League: Gods and Monsters Chronicles for Machinima. BRC also produces the Batman: The Animated Series virtual reality experience with OTOY Inc. for the Mattel View-Master, among others.

Vixen and all related characters and elements are trademarks of and © DC Comics. 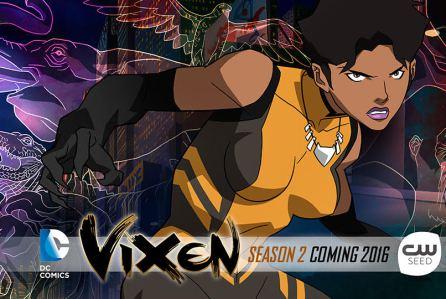 The CW describes Vixen as:

Originally from Africa, Mari McCabe’s (voiced by Megalyn Echikunwoke) parents were killed by local greed, corruption, and wanton violence. But the orphaned Mari refuses to succumb to the terrors surrounding her. Inheriting her family’s Tantu Totem, Mari can access the powers of animals—anything from the super-strength of a gorilla to the speed of a cheetah. As Vixen, she fights valiantly to protect the world from the threats like those that claimed her family.

The second season of Vixen will show the title character expanding her quest for justice outside of Detroit. Characters from Arrow, The Flash and DC’s Legends of Tomorrow, The CW’s live-action shows based on the classic DC Comics characters, will again appear in animated form in Vixen. The CW is expected to release more details on the upcoming in the coming months leading up to its Fall 2016 debut on the CW seed digital service.