New “Batman: The Brave And The Bold” Comic, Schedule And Comic-Con Details

BATMAN: THE BRAVE AND THE BOLD #18

Batman learns what “Life on Mars” is all about when he teams up with the mysterious Martian Manhunter in order to prevent an invasion from the red planet!

Friday, July 2nd, 2010 at 7:30pm (ET) – “The Power of Shazam!”
Batman teams with Captain Marvel, the superhero alter ego of the young Billy Batson, to battle Dr. Sivana and Black Adam, who wish to usurp the magic of Shazam that gives Billy his power.

Friday, July 9th, 2010 at 7:30pm (ET) – “The Golden Age of Justice!”
An aging JSA is faced with the return of their worst enemy, Per Degaton, as he returns from suspended animation to enact a plan for world-domination, while Black Canary helps Wildcat face his greatest regrets.

Friday, July 16th, 2010 at 7:30pm (ET) – “Aquaman’s Outrageous Adventure!”
Aquaman attempts to take a family vacation with Mera and Arthur Jr., but can’t resist helping heroes along the way. Just as he finally promises the family ‘no more heroics,’ Batman is trapped by the Pengiuin.

Friday, July 23rd, 2010 at 7:30pm (ET) – “Chill of the Night!”
The Spectre and The Phantom Stranger observe Batman as he uncovers the mystery of who killed his parents and travels back in time to team up with his own father.

Please note schedule details are subject to change without notice. Batman: The Brave and The Bold airs every Friday at 7:30pm (ET) on Cartoon Network. Cartoon Network would not clarify the reason for airing repeats of Batman: The Brave and The Bold throughout July 2010 when the network earlier stated it had intentions to air new episodes during the month. The network still claims that new episodes are coming before Fall 2010.

Finally, Warner Bros. Animation has passed along the following panel details for the upcoming Comic-Con International San Diego 2010, including details on a Batman: The Brave and The Bold-focused panel.

The 41st annual Comic-Con International San Diego will be held July 22-25, 2010, with Preview Night on July 21st, 2010, at the San Diego Convention Center. The convention is held every year, focusing on host of different genres and pop culture events.

Stay tuned for further Batman: The Brave and The Bold updates, including details on upcoming new episodes from the animated series.

THE END IS NEAR 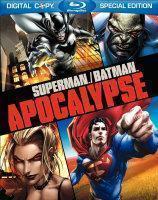 To save an earthbound Kryptonian, the Man of Steel and the Dark Knight unite once again this time to battle the powerful forces of Darkseid in Superman/Batman: Apocalypse, the ninth entry in the popular, ongoing series of DC Universe Animated Original PG-13 Movies coming September 28, 2010 from Warner Premiere, DC Comics and Warner Bros. Animation. The highly anticipated, full-length film will be distributed by Warner Home Video as a Special Edition Blu-Ray and 2-Disc Special Edition DVD as well as single disc DVD. The film will also be available On Demand and for Download.

After a spaceship splashes down in Gotham City Harbor, Batman and Superman encounter a mysterious Kryptonian with powers as great as those of the Man of Steel. The Kryptonian is soon revealed to be Kara, cousin of Superman, who takes her under his wing to educate her about the ways of Earth. However, the villainous Darkseid has other plans. Seeing an opportunity to finally defeat Superman, Darkseid abducts and gains control of Kara, utilizing the powerful Kryptonian to do his bidding. Its up to Batman and Superman to save Kara, but theyll have to take the fight to Darkseid within his hostile world where unknown, deadly threats lurk around every corner, including a brainwashed Kryptonian able to match Superman blow-for-blow.

In addition to the feature film, the Superman/Batman: Apocalypse Special Edition Blu-Ray and 2-Disc Special Edition DVD include the third DC Showcase animated short, Green Arrow. Screenwriter Greg Weismans story finds Oliver Queen at the Star City International Airport to pick up his girlfriend, only to be forced into action as Green Arrow to protect the 10-year-old Princess of Vlatava from his old nemesis Merlyn the Magnificent and the League of Assassins. The short features the voices of Neal McDonough (Desperate Housewives) and Malcolm McDowell (Entourage). Bruce Timm is executive producer.

Superman/Batman: Apocalypse 2-Disc Special Edition DVD features more than 1 1/2 hours of exciting extra content, including:
Feature film (est. 75 min)
DC Showcase: Green Arrow (10 min)
Sneak Peak at the Next DC Universe Animated Original Movie (10 min)
Featurette: Supergirl: The Last Daughter of Krypton – A comprehensive look at The Maiden of Might from her introduction in the classic age of comics to her death in the Crisis on Infinite Earths crossover event to her appearance on Smallville and beyond.
2 bonus episodes from animated television series handpicked by Bruce Timm

Superman/Batman: Apocalypse Special Edition Blu-Ray will include more than 2 1/2 hours of intriguing bonus features, starting with all of the content available on the 2-Disc Special Edition DVD and adding:
All-New Featurette: The New Gods – This documentary covers Darkseids story, particularly in reference to the adaptation of Superman/Batman: Apocalypse. A primer on the wealth of material and stories contained in the New Gods series, along with a deeper understanding of why these characters and especially Darkseid are so memorable and important to the DC pantheon.
All-New Featurette Pods
–Orion – The mightiest warrior on either New Genesis or Apokolips, Orion follows an almost Shakespearean arc culminating in the slaying of his father, Darkseid. This mini-featurette shines a light on this classically tragic character.
–Mister Miracle – This mini-featurette focuses on the greatest escape artist the universe has ever known and how he was traded in a peace effort to be raised by Darkseid, the enemy of all New Genesis.
2 additional bonus TV series episodes handpicked by Bruce Timm
Digital copy on disc of the feature film

“Great things happen when powerful entities come together, and the partnership of Warner Premiere, DC Comics and Warner Bros. Animation is proud to continue this popular film series by once again uniting the two most popular characters in the DC Universe in a story that truly tests their strength, trust, loyalty, ingenuity and heroism,” said Matt Bierman, Senior Vice President Production, Warner Premiere.

“It is a testament to the larger-than-life nature of Jeph Loebs blockbuster storylines that two of the first nine DC Universe movies are based on his work,” said Geoff Johns, Chief Creative Officer of DC Entertainment. “Superman/Batman: Apocalypse lets us see Superman and Batman in action side-by-side again, but this time along with Supergirl and one of DC’s greatest villains, Darkseid.”

“Just as Superman and Batman stand atop the DC canon of characters, so do the respective seminal voices of Tim Daly and Kevin Conroy in the hearts and minds of fans. Superman/Batman: Apocalypse will no doubt please comic-centric and mainstream audiences alike particularly in the performances of Daly and Conroy opposite dynamic actors like Andre Braugher and Ed Asner, and fanboy favorite Summer Glau,” said Amit Desai, WHV Vice President of Family, Animation & Partner Brands.

The bonus episodes featured on the Blu-ray release of Superman/Batman: Apocalypse are slated to be Superman: The Animated Series episodes “Apokolips…Now!, Parts 1 and 2,” and “Little Girl Lost, Parts 1 and 2.” 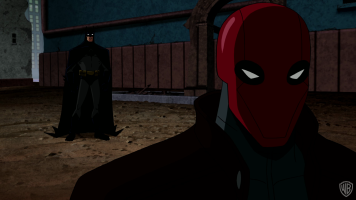 The 54-second clip features an encounter between Batman and Red Hood. In the film, Batman faces his ultimate challenge as the mysterious Red Hood takes Gotham City by firestorm. One part vigilante, one part criminal kingpin, Red Hood begins cleaning up Gotham with the efficiency of Batman, but without following the same ethical code. And when The Joker falls in the balance between the two forces of justice, hard truths are revealed and old wounds are reopened.

Produced by Warner Premiere, DC Entertainment and Warner Bros. Animation, Batman: Under the Red Hood will be distributed by Warner Home Video as a Special Edition version on Blu-Ray and 2-disc DVD, as well as being available on single disc DVD, On Demand and for Download.

A standard definition version of the same clip is also available to view here.

Stay tuned for further Batman: Under the Red Hood updates, including exclusive content and more here soon at The World’s Finest.