In this action packed collection, the Young Justice team adds to its ranks in an effort to battle the impending invasion by The Collector of Worlds, and one of the DC Universe’s favorite villains, Braniac.
$12.99 US, 160 pg

Further details for the Young Justice: Invasion – Volume One comic collection are set for release later this year.

The final issue of the Young Justice comic series was released in February 2013. Additional comic details can be found here.

Young Justice recently aired its final episode earlier this month on Cartoon Network. The series is set to remain in reruns for at least a couple more weeks before being shuffled out of the DC Nation programming block. Young Justice airs Saturdays at 10:30am (ET/PT) as part of the DC Nation programming block on Cartoon Network. Stay tuned for further updates and more here soon at The World’s Finest, including details on the next Young Justice home video release.

Publisher Little Orbit has officially released cover artwork for the upcoming Young Justice: Legacy video game title, which is slated to hit September 10th, 2013 on all major consoles. Little Orbit is the studio handling the upcoming video game based on the acclaimed Cartoon Network animated series inspired by the DC Comics characters. Young Justice: Legacy, released in conjuncture with Warner Bros. Interactive, is an Action-RPG based on the popular Young Justice animated series. The video game will launch for an assortment of consoles including the PlayStation 3, Xbox 360, and Nintendo DS and Wii-U. Continue below to view the final cover artwork along with preliminary sketches released by the studio.

A representative for Little Orbit said that a new trailer and additional promotional material is set to be released in the coming weeks. Additional details on the upcoming video game, including game facts and a press release, can be found here and here. The gallery of images can also be found here.

Both Young Justice: Invasion and Green Lantern: The Animated Series saw an increase in ratings as both celebrated animated series aired their respective finales on Saturday, March 16th, 2013 as part of the DC Nation programming block on Cartoon Network. The block airs at 10:00am (ET/PT) on Saturday mornings, with re-airings the following Sunday. Turner Broadcasting released preliminary ratings data for the week of March 11th – 17th, 2013 for a bevy of Turner-owned networks, including Cartoon Network.

The Young Justice: Invasion series finale episode “Endgame” was the top-rated show for Cartoon Network for the week of March 11th – 17th, 2013, beating out other network stalwarts such as Regular Show, Adventure Time, and Dragons: Riders of Berk. The episode also beat a Sunday prime-time showing of the movie Dairy of a Wimpy Kid. The March 16th, 2013 Saturday, 10:30am (ET/PT) timeslot for the Young Justice: Invasion episode “Endgame” brought in an estimated 2.05 million viewers from an estimated 1.3 million households. The 10:30am (ET/PT) Sunday re-airing of “Endgame” on March 17th, 2013 brought in an additional 1.1 million viewers from 900,000 households. Click here to view exclusive content and media from this episode.

Young Justice: Invasion averaged an audience of 1.9 million viewers every Saturday since returning to Cartoon Network with new episodes in January 2013.

The finale episode of Green Lantern: The Animated Series “Dark Matter,” which aired Saturday, March 16th, 2013 at 10:00am (ET/PT), brought in an estimated 1.82 million viewers from 1.2 million households. The finale Green Lantern: The Animated Series episode beat out airings of Adventure Time, Regular Show, and Ben 10: Omniverse. The 10:00am (ET/PT) Sunday re-airing of “Dark Matter” on March 17th, 2013 brought in an additional 1.21 million viewers from 800,000 households. Click here to view exclusive content and media from this episode.

Green Lantern: The Animated Series averaged an audience of 1.7 million viewers every Saturday since returning to Cartoon Network with new episodes in January 2013.

Combining overall weekend performance, both Green Lantern: The Animated Series and Young Justice: Invasion pulled in three million viewers over the two airings of their respective finale episodes. While both airings were not the highest-rated outings for both series, the finale airings saw a notable uptick from the previous weeks’ airing.

Please note, the above data does not take into account legal iTunes (and similar media) episode downloads, or DVR and PVR airings. DVR and PVR recorded airings, on average, can increase a program’s viewership from 5 – 10%.

Warner Home Video has issued a press release announcing appearance plans for WonderCon 2013. Warner Home Video will host two panels, one for the upcoming DC Universe Animated Original Movie Superman: Unbound and another for the upcoming direct-to-video animated feature Lego Batman: DC Superheroes Unite. Both titles are set to hit home video and digital outlets in May 2013. Full details, and three new images from Superman: Unbound, are available below.

On Friday, March 29 at 6:00 p.m., fans lucky enough to gain admission to the Anaheim Convention Center’s Arena will witness the World Premiere of Superman: Unbound, the latest DC Universe Animated Original Movie. A destructive force is devastating planets across the galaxy – with Earth next in its sights – and even Superman may not be capable of halting the destruction alone. Based on the Geoff Johns/Gary Frank 2008 DC Comics release “Superman: Brainiac,” the film’s stellar voicecast is led by Matt Bomer (White Collar) as Superman, John Noble (Fringe, The Lord of the Rings films) as Brainiac, Molly Quinn (Castle) as Supergirl and Stana Katic (Castle) as Lois Lane. Quinn will be on hand to lead the post-premiere panel discussion alongside producer/director James Tucker (Justice League, Batman: The Brave and the Bold), screenwriter Bob Goodman (Warehouse 13, Batman: The Dark Knight Returns) and eight-time Emmy Award-winning dialogue director Andrea Romano (Batman: The Dark Knight Returns). As always, the panel discussion will include exclusive prizes and some potential glimpses into future DCU animated films by moderator Gary Miereanu. Produced by Warner Bros. Animation, DC Entertainment and Warner Bros. Home Entertainment, Superman: Unbound will be released on Blu-ray, DVD, OnDemand and For Download on May 7, 2013.

Prior to the premiere, the Superman: Unbound panelists will sign WonderCon-exclusive mini-posters from 3:00-4:00 p.m. at the DC Entertainment booth.

On Sunday, March 31 at 2:00 p.m. in Room 300AB, Warner Bros. Home Entertainment will present the first West Coast screening of LEGO Batman: The Movie – DC Superheroes Unite. The ultimate blend of action and humor guaranteed to entertain fanboys of all ages, LEGO Batman: The Movie – DC Superheroes Unite finds Lex Luthor taking jealousy to new heights when fellow billionaire Bruce Wayne wins the Man of the Year Award. To top Wayne’s accomplishment, Lex begins a campaign for President – and to create the atmosphere for his type of fear-based politics, he recruits the Joker to perfect a Black LEGO Destructor Ray. While wreaking havoc on Gotham, Lex successfully destroys Batman’s technology – forcing the Caped Crusader to reluctantly turn to Superman for help.

Prior to the screening/panel, LEGO Batman: The Movie – DC Superheroes Unite panelists will sign WonderCon-exclusive mini-posters from Noon-12:45 p.m. at the DC Entertainment booth.

From TT Animation, creators of the best-selling video game upon which the film is based, LEGO Batman: The Movie – DC Superheroes Unite will be released May 21, 2013 via Warner Bros. Home Entertainment on Blu-ray and DVD. 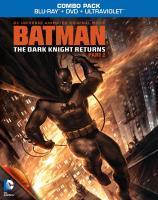 According to various home media retailing outlets and independent research, the recent Batman: The Dark Knight Returns, Part Two direct-to-video animated feature has moved an estimated 167,000 units in its first week – the weekend ending February 3rd, 2013, with 62,000 of those sales coming from DVD and 105,000 from the Blu-ray format. The latest film in the DC Universe Animated Original Movie line, currently available to own on Blu-ray Combo Pack, DVD, Download, and onDemand, is the second in a two-part adaptation of the acclaimed 1980s comic series The Dark Knight Returns starring a retired Batman who dons the cape and cowl to deal with a city decaying into crime.

To compare, Batman: The Dark Knight Returns, Part One moved an estimated 157,500 units in its first week – the weekend ending September 30th, 2012, with 60,500 of those sales coming from DVD and 97,000 from the Blu-ray format. The previous DC Universe Animated Original Movie has been a consistent seller since its release, having sold over 300,000 units in combined Blu-ray and DVD sales.

Blu-ray sales have accounted for an estimated 71% of total Batman: The Dark Knight Returns, Part One home video sales since its first week, with the high-definition format easily the dominant media. Keep in mind the sales numbers above do not take into account rental numbers, OnDemand numbers, or legal download numbers. Additionally, please note that the Batman: The Dark Knight Returns, Part One Two-Disc Special Edition DVD release did not go wide until March 16th, 2013.

A source at Warner Home Video indicates that a possible Batman: The Dark Knight Returns special edition release, combining both parts of the animated feature together, will likely happen soon.

A co-production of Warner Premiere, Warner Bros. Home Entertainment Group, DC Entertainment and Warner Bros. Animation, the direct-to-video Batman: The Dark Knight Returns, Part Two animated feature is now available to own on Blu-ray Combo Pack and DVD, On Demand and for Download.