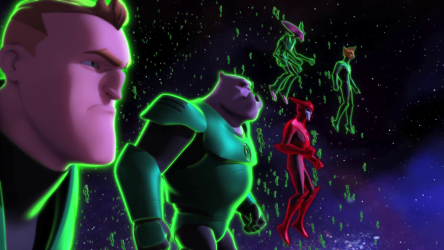 Synopsis: In the season finale episode, the Aya Monitor returns to the dawn of time to stop all emotion and all life from ever existing. Now, Hal must find a way to stop her – while Razer realizes the only way to save the universe may mean killing the woman he loves.

The above content is also available on the The World’s Finest Green Lantern: The Animated Series subsite, along with additional images and videos.

“Dark Matter” will also re-air later in the same day, on Saturday, March 30th, 2013 at 5:30pm (ET/PT). Green Lantern: The Animated Series airs Saturdays at 10:30am (ET/PT) on Cartoon Network Canada, paired with a 10:00am (ET/PT) airing of Young Justice. DC Nation animated shorts air throughout the week on Cartoon Network Canada, with no set schedule.

New episodes are set to debut January 2013 as part of the Saturday-morning schedule for Cartoon Network Canada. The network has currently been unable to provide any further episode details despite requests. A specific premiere date for new Young Justice and Green Lantern: The Animated Series episodes in January 2013, along with episode-specific details, were not provided.

Green Lantern: The Animated Series
Saturday, December 1st, 2012 at 10:30am (ET/ PT) – “Fear Itself”
Hal and Kilowog visit an alien planet in search of food, but encounter two warring races of aliens!

Green Lantern: The Animated Series
Saturday, December 15th, 2012 at 10:30am (ET/ PT) – “Regime Change”
Hal and company go back to Betrassus, where Queen Iolande needs help from her evil brother, Prince Ragnor, who is now a Red Lantern!

Green Lantern: The Animated Series
Saturday, December 29th, 2012 at 10:30am (ET/ PT) – “Invasion”
Hal and the crew are trying to stop the Red Lanterns from reaching Guardian Space.

Episodes from the first season of Young Justice are set to air during December 2012 on the Canadian Cartoon Network channel. The network, which launched Summer 2012 in Canada, airs Young Justice Saturdays at 10am (ET/PT) and 7:30pm (ET/PT) and Sundays at 8pm (ET/PT). The first thirteen episodes of Young Justice aired on Teletoon, an animation-based network exclusive to Canada, before moving exclusively to Cartoon Network Canada. The network is currently airing the entire 26-episode first season. December 2012 schedule details, courtesy of the network, can be found below.

Young Justice
Saturday, December 1st, 2012 at 10:00am (ET/ PT) – “Coldhearted”
Wally West comes oh-so-close to fulfilling his birthday wish to finally fight alongside the Justice League. Instead, a massively disappointed Kid Flash is taken off the mission and tasked with a simple delivery job. But a few deadly surprises await the birthday boy along the way…

Young Justice
Saturday, December 8th, 2012 at 10:00am (ET/ PT) – “Image”
A covert operation against Queen Bee in Qurac forces Miss Martian to finally face her greatest fears and her biggest secrets. But will she reveal those secrets to her friends – or allow what she’s hiding to take down the entire team?

Young Justice
Saturday, December 15th, 2012 at 10:00am (ET/ PT) – “Agendas”
Superboy returns to Project Cadmus, where he learns the top-secret genetics lab may have created another Super-clone…

Young Justice
Saturday, December 29th, 2012 at 10:00am (ET/ PT) – “Performance”
The Team goes undercover at the Haly International Traveling Circus to locate a thief stealing weapons technology across Europe. But a thief isn’t all they find…

Green Lantern: The Animated Series
Saturday, November 3rd, 2012 at 10:30am (ET/ PT) – “Into the Abyss”
Aya reveals that she can download her sentience into a robotic body.