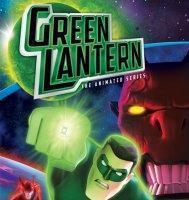 A new trade paperback collection, featuring the six issues of the late Green Lantern: The Animated Series comic title, is now available to own from DC Comics.

The Green Lantern: The Animated Series – Volume Two collection, featuring issues # 6 – 11, includes stories written by Art Baltazar, Franco, Cecil Castellucci, and Ivan Cohen with artwork by Dario Brizuela and Luciano Vecchio. The Green Lantern: The Animated Series comic title features stories which take place in the continuity of the fan-favorite acclaimed animated series of the same name. Both the animated series and spin-off comic title came to an end last year. Continue below for details on the collection provided by DC Comics along with the promotional and final artwork for the release.

Written by: Art Baltazar, Franco, Cecil Castellucci, and Ivan Cohen
Art by: Dario Brizuela and Luciano Vecchio
In this second Green Lantern: The Animated Series collection, featuring issues #6-11, Hal Jordan leads his team into battle against Atrocitus and a horde of other Red Lanterns!

Issues #12 – 14 of the Green Lantern: The Animated Series comic title currently remain uncollected, though the entire short-lived series is available to read digitally through Comixology and DC Comics.

Additional details on the both the Green Lantern: The Animated Series comic series and cartoon can be found here. Stay tuned for further updates and more, right here at The World’s Finest

DC Comics has officially announced details for the December 2013 issue of Beware The Batman, the new monthly comic series. The comic title is based on the new Cartoon Network animated series of the same name. Beware the Batman incorporates Batman’s core characters with a rogue gallery of new villains not previously seen in animated form. Along with backup from ex-secret agent Alfred and lethal swordstress Katana, the Dark Knight faces the twisted machinations of Gotham City’s criminal underworld. The comic book will feature rotating artists and writers providing stories based on the continuity of the new DC Nation CG-animated cartoon. Continue below for further details.

Tobias Whale has not forgotten the store of weapons sunk under Gotham City’s bay. He’s ready to salvage the ship, but Batman’s also made plans. When they collide undersea near the continental shelf, who will prevail?

Continuing, the comic book-based comedy adventure series Teen Titans Go! – a ratings hit for Cartoon Network and based on the beloved DC Comics property – is set to get a new comic book-spin-off title starting December 2013. The bi-monthly comic book title, also called Teen Titans Go!, will collect two 10-page stories per issue. Each 10-page story will be initially released monthly through digital outlets starting October 2013. Details for the debut print issue of Teen Titans Go! can be found below.

Based on the hit new TV show, feast your eyes on this all-new, all-ages comic book series! Join Robin, Starfire, Beast Boy, Cyborg and Raven as they display their unique brand of hijinks, mayhem and justice! But giant pizza monsters aren’t the only dastardly and delicious villains on the menu…so dig in, Titans!

In this second Green Lantern: The Animated Series collection, featuring issues #6-11, Hal Jordan leads his team into battle against Atrocitus and a horde of other Red Lanterns!

A three-disc set collecting an assortment of DC Comics-based cartoons from the the past 90 years is now available to own from Warner Home Video. The Best of Warner Bros. – 25 Cartoon Collection DC Comics three-disc set features episodes from different animated series including Justice League Unlimited, Superfriends, Batman: The Animated Series, among many others. The MSRP of the three-disc DVD collection is $26.99. Best of Warner Bros. – 25 Cartoon Collection DC Comics is part of the studio’s ongoing celebration of acknowledging its best properties. A collection of menu stills and package artwork images can be found below, along with an official description of the product, exclusive to The World’s Finest.

Best of Warner Bros. – 25 Cartoon Collection DC Comics
Product Description:
A collection of classics in a league of their own! It’s a heroic hall of fame as all your favorite DC Comics crime fighters are here in an all-new 3-disc collection that bursts from the Warner Bros. vault! Legendary heroes, infamous villains and daring deeds await as Superman confronts old enemies in “Little Big Head,” Batman battles to take back Gotham City in “Legends of the Dark Knight” and the Justice League suit up for adventure to battle “Chaos at the Earth’s Core.” Victory is sure to be yours with 25 action-packed episodes that helped contribute to 90 Years of Warner Bros. cartoon magic, It’s a timeless celebration with something for every hero of your family!

Episodes:
Superman (A.K.A. The Mad Scientist)
The Bride of Darkseid, Part 1
The Bride of Darkseid, Part 2
The Death of Superman
The Seeds of Doom
Mad Love
Legends of the Dark Knight
Heavy Metal
Little Big Head
Out of the Past
For the Man Who Has Everything
The Doomsday Sanction
Chaos at the Earth’s Core
Destroyer
Epilogue (Batman Beyond tie-in)
Go!
Terra
The Streaky Story
Man of Tomorrow
The Golden Age of Justice!
Revenge of the Reach!
Clash of the Metal Men!
Independence Day
Misplaced
Reboot

The Best of Warner Bros. – DC Comics Collection three-disc DVD release, a collection of 25 animated episodes starring assorted DC Comics characters, is now available to own for the MSRP of $26.99. The collection, part of the studio’s ongoing celebration of acknowledging its best properties, highlights an assortment of series from DC Comics lengthy animation history. Stay tuned for further updates here soon at The World’s Finest.

Please note that The World’s Finest has returned from the FanExpo 2013 convention and, as such, there may be interruptions in regular website and social media updates this week.