DC Comics is releasing a new Batman Adventures trade paperback collection come April 2021, as shown in DC Comics’ March 2021 comic solicitations. The collection, titled Batman Adventures: Riddle Me This!, includes an assortment of issues from both Batman: Gotham Adventures and Batman Adventures, focused on the classic Batman foe. The title is part of the digest-sized DC Comics graphic novels line aimed at all ages readers. Continue below for artwork and release details.

BATMAN ADVENTURES: RIDDLE ME THIS! TP

This all-ages collection of stories set in the world of Batman: The Animated Series stars one of Batman’s most vexing villains…the Riddler! His schemes are never easy to solve, and in these adventures, it’s no different! Riddler flips the script by leaving Batman clues…to other villains’ crimes, and faces the music when he holds a rock star hostage! And when a copycat tries to steal the Riddler’s style, who will find them first—Batman or the Riddler? Collects Batman: Gotham Adventures #11, #28, #56-57, and Batman Adventures #11.

Check out the Batman: The Animated Series subsite here at The World’s Finest for more on Batman Adventures and the classic animated series. Batman Adventures: Riddle Me This! hits comic book shelves and most book retailers on April 6, 2021. Stay tuned for further updates, and be sure to click the link below to discuss this news!

DC Comics will release a special digital comic series tie-in to the forthcoming Batman and Harley Quinn animated movie. The series will act as both a prequel and sequel to the forthcoming DC Universe Animated Original Movie title from Warner Bros. Home Entertainment and DC Entertainment. Batman and Harley Quinn arrives August 15, 2017 on Digital Download and August 29, 2017 on Blu-ray and DVD. Continue below for press details and a first look at the comic itself.

It’s the team-up we’ve been dreaming of as the cute psychopath Harley Quinn joins the brooding Dark Knight for a brand-new Digital First comic series, Harley Quinn and Batman. The series, from Batman: The Animated Series writer Ty Templeton and artist Rick Burchett, is an exciting new five-chapter prequel adventure to the Batman And Harley Quinn animated film coming out this August from Warner Bros. Home Entertainment. 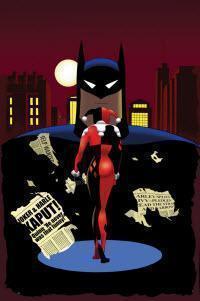 “Batman and Harley, Joker and Ivy, Nightwing and Catwoman. Is there a better cast of characters anywhere in fiction?” says Templeton. “I spent some of the best years of my career working with these icons and could not be happier to be returning to Gotham City and their adventures. And to top it off, I get to work with the incomparable Rick Burchett again! Pinch me, I’m dreaming. We’re getting the band back together!”

Harley Quinn is a legend in her own mind, so when she realizes the Joker thinks of her as a sidekick, she takes her revenge. Harley’s now faced with a hard decision to break out as her own super-villain, and she’s willing to go for it!

“I spent quite a few years working with these characters in this art style,” says Burchett. “It’s like visiting old friends. For me, though, the best part is having the opportunity to work with Ty Templeton again. It’s been way too long.”

The digital series will launch Monday, July 31, with the five chapters being released bi-weekly.

But wait! Where’s the sequel?

Beginning in October, seven sequel chapters will be released digitally each week, and to make it extra-crazy, we flipped the names! Batman and Harley Quinn is a collection of stories tied to the events of the film. These chapters will feature stories and art by Jeff Parker, Craig Rousseau, Luciano Vecchio, Amanda Deibert, David Hahn, Dario Brizuela, Matthew Dow Smith, Sandy Jarrell, Ty Templeton and more.

All 12 chapters will be collected in trade paperback in summer 2018. Digital chapters will be available for download beginning July 31 via the DC Comics App, readdcentertainment.com, iBooks, comiXology.com, Google Play, Kindle Store and Nook Store.

About the movie:
In Batman and Harley Quinn, Poison Ivy and Jason Woodrue (a.k.a. The Floronic Man) embark on an ecological quest to save the planet – and, unfortunately, eliminate most of humankind along the way. To save humanity, Batman and Nightwing are forced to enlist Harley Quinn to catch Poison Ivy, Harley’s BFF and frequent partner-in-crime. But Batman’s patience is put to the test by the unpredictable and untrustworthy Harley during the twists and turns the reluctant companions face during their bumpy road trip. The result is a thrill ride of action, adventure and comedy no Batman fan has seen before. Produced by Warner Bros. Animation and DC Entertainment, the all-new, feature-length animated film arrives August 15 on Digital and August 29 on Ultra HD Blu-ray Combo Pack, Blu-ray Deluxe Giftset, Blu-ray Combo Pack and DVD.

Batman and Harley Quinn will have a special one-night only theatrical screening at select locations on August 14, 2017. Details are available here.

Continue below for the details for this new The Batman Adventures collection, including initial cover artwork.

Some of the best all-ages Batman stories ever are back in this new title collecting BATMAN ADVENTURES #2 and 27, BATMAN: GOTHAM ADVENTURES #2 and 4, and a short tale from ADVENTURES IN THE DC UNIVERSE #3. Guest-starring Catwoman, The Joker, Two-Face and more!

DC Comics Presents: Batman Adventures is slated for release on July 30th, 2014. The collection will retail for $7.99US.

The Batman Adventures was a critically acclaimed comic book launched in the 1990s to coincide with the debut of Batman: The Animated Series. Running for nearly a decade through an assortment of revamps and reboots, the comic title which featured stories which took place in continuity of Batman: The Animated Series. The series featured work by Paul Dini, Bruce Timm, Kelley Puckett, Mike Parobeck, Ty Templeton, Rick Burchett, Dev Madan, Joe Staton, Tim Levins, Scott Peterson, Dan Slott, and many others.