With the season finale of Young Justice: Phantoms approaching, The World’s Finest caught up with the music collective known as Dynamic Music Partners – consisting of Michael McCuistion, Lolita Ritmanis and Kristopher Carter – to discuss their journey with The Team and the how the acclaimed animated series has impacted their work, among other topics. Click on the image below to check out the interview. 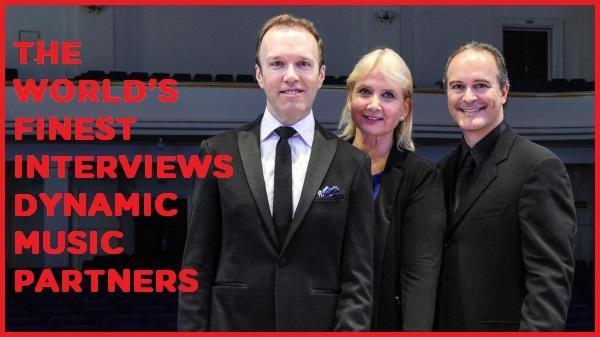 Dynamic Music Partners is a team of three award-winning composer/arranger/conductors who’ve scored a host of acclaimed superhero shows, from Batman: The Animated Series and Superman: The Animated Series to The Spectacular Spider-Man, Teen Titans and countless others. For more on Dynamic Music Partners – including details on past, present and future works, along with news on forthcoming releases and appearances – check out their official website! On social media, be sure to follow them on Twitter, Facebook, Instagram and YouTube!

New episodes of Young Justice: Phantoms are currently streaming each week on HBO Max. The first half of Young Justice‘s fourth season, along with the show’s previous three seasons, is also available on the streaming service. Stay tuned right here for further Young Justice coverage and updates, and check out the The World’s Finest Young Justice subsite for more images, videos, exclusive content and much more! Discuss this news by clicking the link below.

Stealing a few moments away from his busy schedule, Young Justice Series Producer Greg Weisman sat down with The World’s Finest to discuss his upcoming role as co-writer for the DC Comics-published Young Justice comic series. He and co-writer Kevin Hopps (The Spectacular Spider-Man animated series) begin writing the comic series, which expands on the continuity of the animated series of which it is based, with issue #7. Continue below for the introductory Q & A.

The World’s Finest: How closely have you been working with the Young Justice comic book? What type of work was involved to make sure it synced up with the animated series?

Greg Weisman: Kevin Hopps, Brandon Vietti and myself have been working very closely with the folks at DC on Young Justice from the very beginning. We suggested story ideas for issues 1 – 6 that fit into the television series’ continuity – right down to our show’s trademark “Timestamps”. Then we reviewed all materials to maintain maximum consistency.

WF: How much input did you have on the story ideas and execution for the previous creative team?

GW: Kevin, Brandon and I suggested the three stories that made up the first six issues. As for the execution, hopefully we managed to stay out of their way. Maintaining consistency shouldn’t mean restricting anyone’s creativity. Prior to Kevin and I coming aboard, Young Justice had some terrific people working on it. We wanted them to feel free to bring their collective creative spark to the book, in story, in dialogue and visually.

WF: You and Kevin Hopps take over as writers for the Young Justice series with issue #7. Break down that first issue for us!

GW: Well, on page one, panel one… Uh. Maybe I won’t break it down quite that much. Basically, this story focuses on the introduction of Artemis to the Team and the series – but this time from her point of view. So we will see events we’ve already seen on television, but in ways we haven’t seen before.

WF: As a semi-follow-up…why work on the Young Justice comic series? What appeal does it bring to the table, to work on both the comic and the cartoon?

GW: In a way, it’s a dream come true – no matter how corny that sounds. We just have so many stories to tell that there’s no way we could fit them all into the number of episodes that Cartoon Network has ordered. The comic gives us the opportunity to give both depth and breadth to the world and the characters.

WF: What can fans expect from your run on the title? Are you in it for the long-haul?

GW: We’re definitely in it for the long haul. The goal is to make the comic book enjoyable in its own right. You don’t have to watch the series to enjoy the book. Likewise, you don’t have to read the book to enjoy the series. But if you consume both, there’s just no doubt you’ll get so much more out of the Young Justice property as a whole (Assuming we do our jobs right.)

WF: How closely will this series tie in with what we see on the series. Will your stories act as sort of…”lost episodes” or just “episodes…in comic form”? For example, can we expect vital plot points to be revealed here that may show up in an episode down the line?

GW: As I think is clear – even from the issues that preceded us – the comic will tie in very closely with the animated series. Some arcs will in fact be so-called “lost episodes” that will fill in the blanks between television episodes. Others will launch their own subplots. And things have already premiered in the comic that will have an impact on the television series down the line. And vice versa. Of course, the hardcore fan of Young Justice can always keep track of exactly where the comic fits into overall continuity, thanks to the timestamps that exist on both series.

WF: How does plotting and writing out a script for a comic differ from that of a television series episode?

GW: Fundamentally, not much at all. An individual issue of a comic book (at 20 pages) can’t quite stuff in the same amount of content as an episode of the television series, which is why we’re currently focused on two-parters, with a cliffhanger in the middle. But otherwise, we break a story down within the overall arc or trajectory of the lives of our ensemble cast. We then break each issue down beat-by-beat and then page-by-page and panel-by-panel.

WF: Much like the Young Justice animated series, do you have a long-term plan for the Young Justice comic, too? What should we keep an eye out for in this series as you start your run? Secrets? Teases? Hints to future episodes, perhaps?

GW: We have more long term plans for Young Justice then we could possibly hope to cover. But we’re going to try. Any character the audience has seen on the series is fair game for the comic. And some may show up in the comic first. But in the near term, keep an eye out for Professor Ivo, Clayface, Ocean-Master and Ra’s al Ghul!

WF: With the comic covered, can you perhaps drop a hint or two about what we can expect when Young Justice returns to Cartoon Network in the fall with new episodes?

WF: To wrap things up, tell us why fans should run out to pick up Young Justice #7 – the first issue of your run with co-writer Kevin Hopps!

GW: So far the comic has focused on the Team’s earliest days. It’s time to bring Artemis into the mix. And it’s time to reveal a few of her secrets as well. Find them in Young Justice #7 – AND ONLY IN YOUNG JUSTICE #7!!