CELEBRATED NOVELIST GREG RUCKA DISCUSSES WRITING A CHAPTER OF
BATMAN: GOTHAM KNIGHT, THE THIRD DC UNIVERSE ANIMATED ORIGINAL FILM
Want a nice, frank conversation? Corner Greg Rucka and pick a subject. He is anything but restrained, speaking freely and constantly exuding the kind of creative flashpoint from which arises his fascinating array of benchmark characters. 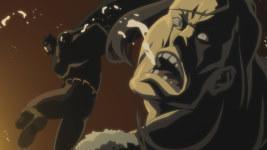 Raised on Californias Central Coast, and schooled at Vassar College and USC, Rucka brings a street sensibility to his work which has ranged from nearly a dozen novels and several short stories to a daunting list of comics, non-fiction essays and, now, a segment of the highly-anticipated animated film, Batman: Gotham Knight.

Batman: Gotham Knight, the third film in the ongoing series of DC Universe animated original PG-13 movies, will arrive July 8, 2008 on DVD and Blu-Ray disc, and will also be available that day On Demand via digital cable and for download through broadband sites. The film is produced as a collaboration between DC Comics, Warner Premiere, Warner Home Video and Warner Bros. Animation.

Rucka will make the trek from his Portland, Oregon home to Wizard World Chicago this June to attend the world premiere of Batman: Gotham Knight and participate on the post-premiere panel. With Rucka joining producer Bruce Timm and fellow Batman: Gotham Knight writers Alan Burnett and Brian Azzarello on the panel (and quite possibly a few yet-to-be-announced special guests), it promises to be an extremely entertaining evening.

Rucka has already built an astonishing career, complete with his share of Eisner Awards for works like Whiteout: Melt and Gotham Central: Half a Life. His characters, most notably bodyguard Atticus Kodiak and Queen & Country series protagonist Tara Chace, have drawn a legion of fans into his literary wake. Hes written for some of DC Comics best-known characters, including Superman and Wonder Woman. Inspired by his graphic novel of the same name, Whiteout will come to theaters as a major motion picture later this fall with Kate Beckinsale in the lead role.

But Batman is the subject today and Rucka is happy to share his thoughts. For his segment, entitled “Crossfire,” Rucka brings to animated life the detectives familiar to fans of his Gotham Central comics highlighted by the starring role of Crispus Allen. In the segment, which is the second chapter of the six-part film, the Gotham City police dont trust the mysterious Dark Knight until they get a first-hand experience of his power and integrity while both detectives and super hero are under fire.

James HarveyBatman Beyond, Batman Beyond: Return of the Joker, Batman: Mystery of the Batwoman, Batman: The Animated Series, Blu-ray/DVD/Digitalbatman beyond, batman: the animated series0

Legion of Super Heroes – Volume Three will hit shelves on September 9th, 2008 and have a SRP of $14.98. The collection will include five episodes from the animated series. Further details will be released shortly.

The World’s Finest: First off, tell us a little bit about yourself. Your background, your previous work, all that great stuff!

Ethen Beavers: I loved to play with clay as a child- I think they call it sculpting when you get older. I made cowboy dinosaurs. The clay got in the carpet, so clay was outlawed. So then I started drawing. I’ve been drawing ever since. I started looking for work in comics in 2003. Since then I’ve worked on Justice League Unlimited, Ben 10, TeenTitans Go!, Legion of Super-Heroes in the 31st Century, Samurai Jack, Clone Wars Adventures, and Indiana Jones Adventures. I’ve worked mostly at DC and Dark Horse. I have a tiny bit of experience as a Storyboarder in the animation field. I ink almost all of my own work.