Hello and Happy Holidays, everyone!

The 2008 Holiday Season is now upon and with that comes the end of another big year for fans of DC Animation. We had quite a topsy-turvy year full of major highs and major lows, including some huge fan-anticipated releases and some popular cartoons and comic books coming to an end, marking the end of era for many fans.

On the upside, the score to assorted Batman: The Animated Series episodes received the soundtrack treatment this year with the first of many possible CD soundtrack releases. Batman: The Animated Series also had a lavish “Complete Series” 17-Disc DVD release hit shelves in November. DC Animation fans also enjoyed a host of new animated projects this year, including Justice League: The New Frontier, Batman: Gotham Knight, and Batman: The Brave and The Bold. On the downside, we had two shows come to an end, The Batman and Legion of Super Heroes, and, with that, we also lost four animated comic titles, as well. The Batman Strikes!, Legion of Super Heroes in the 31st Century, Teen Titans Go! and Justice League Unlimited all printed their final issues this year. We lost so much, but, thankfully, theres a lot going on right now, as well as new projects on the horizon, that should fill the void left by the departure of these comics and animated series. Now, much more happened this year in the world of DC Animation, but the above is just a quick overview of some of the major events of 2008.

While 2008 passed by quickly, it was a busy year here for all of us. New movies, new television series (more of both to come in the coming years, by the way), new comics, all of which has kept us both busy and talking. And, as we wind down the year, wed like to inform everyone that the news staff here at The Worlds Finest will be taking a two-week holiday vacation to recoup from a very busy year. In fact, the staff has been working overtime to provide a solid months worth of news before taking a holiday sabbatical. There will be no regular daily news updates posted, beginning today, until we return on January 5th, 2009 with a whole new year of news to report. However, there will still be the occasional news story to report between now and then, so be sure check back over the next two weeks. While our regular daily reporting will be suspended for the next two weeks, we will also still report on any major developments during that time if they arise. We may even drop some news on the forums, too. On top of that, we’ll still be around to answer any emails, PMs, or forum posts!

Outside of the news, The Worlds Finest has many plans already underway for the new year, including new features, new subsites (such as the long-delayed Legion of Super Heroes subsite), and much more. In fact, we have a very cool surprise for Batman: The Animated Series fans coming before the end of the year, so keep your eyes peeled. January 2009 will see the kick-off of our 10th anniversary celebration for Batman Beyond, and thats only the beginning. Remember the Wonder Woman direct-to-video animated feature isn’t far behind, arriving in March 2009, and we have lots of exclusive Batman: The Brave and The Bold content planned for 2009. We have some great stuff planned for both The Worlds Finest and our spin-off site The WF DVD Report for the coming year! Stick around and keep checking back. Oh, before we forget, if you have any site updates you’d like to see, please PM (via the forums) or email Bird Boy and/or James Harvey. We’ll get to them quicker that way!

Now, in the spirit of the season, we here at The World’s Finest would again like to wish everyone here a great holiday season! Why not pop in Justice League‘s “Comfort & Joy,” or Batman: The Animated Series‘ “Christmas with the Joker” and “Holiday Knights” to celebrate this festive time? And why not crack open some of the holiday-themed Batman Adventures comics? There are some great stories to be read there.

Wed also like to thank the strong creative teams of our favorite programs, movies, and comics for providing a year of great entertainment. Whether its the direct-to-video features, the animated television series, or the comic books, weve had a lot to talk about, and well have a lot more to talk about next year! There’s more DC-themed cartoons and animated movies coming down the pipeline with major announcements right around the corner! It’s been a great year here and we’d like to thank everyone who has made stopping by here everyday part of their daily ritual. We strive to do our best, even when it seems like there’s too much on our plate and not enough hours in the day, and we are honored to retain our status as both the No. #1 largest DC Animation site and Batman animation site on the net. To those who contribute and provide content for the site, to those who post on the forums, etc., wed like to express our sincere thanks for helping us build a better site. There’s a lot more to come in 2009, so stick around! 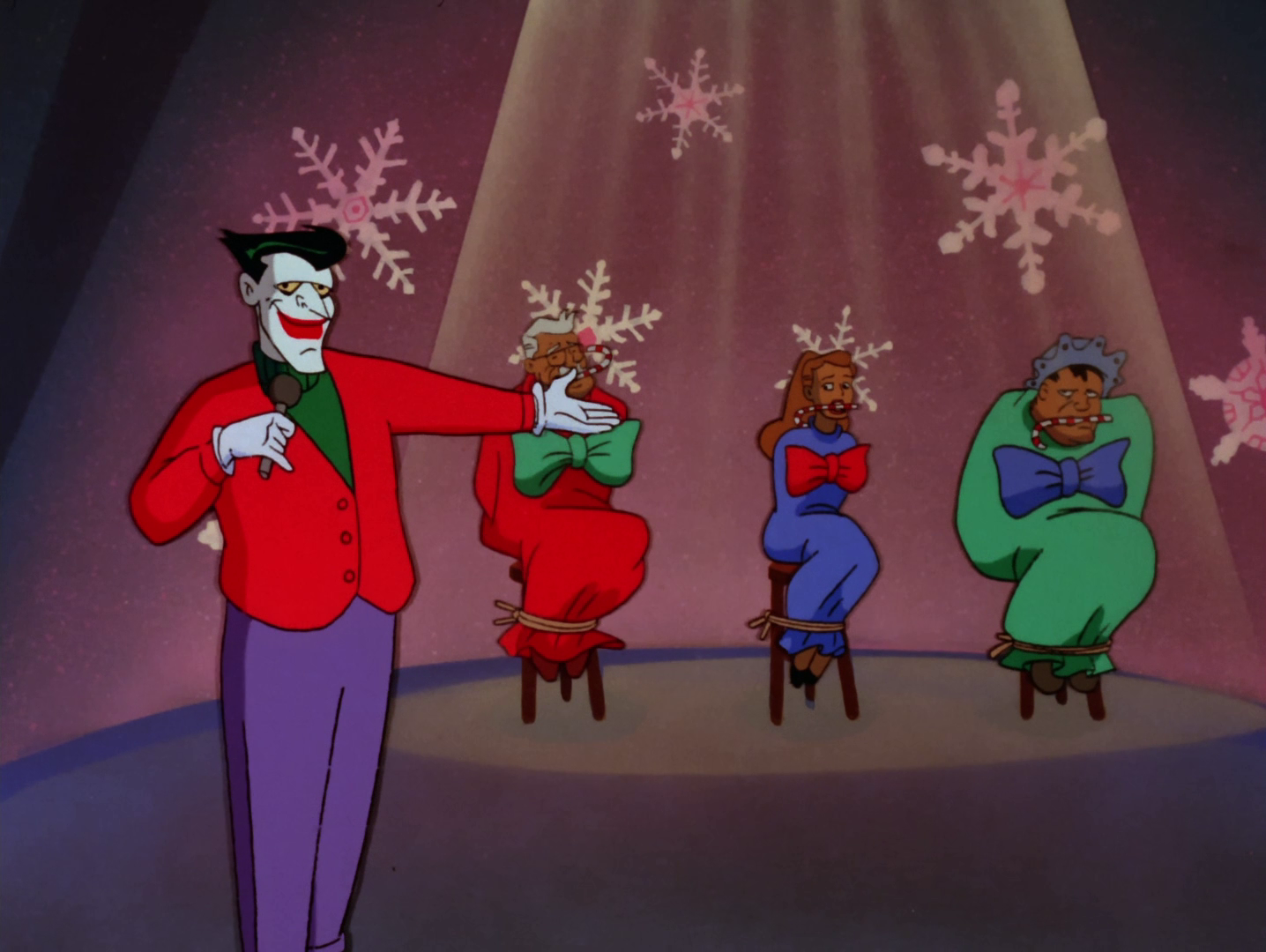 The Jetix block on Toon Disney has scheduled the Batman: The Animated Series episode “Christmas With the Joker” for Thursday, December 25th, 2008, at 9:00pm (ET). The episode is described as follows.

Christmas with the Joker
The Joker takes over Gotham’s airwaves and terrorizes the city during Christmas. Holding Commissioner Gordon, Detective Bullock, and Summer Gleason hostage, he challenges Batman to find him before midnight, or else the hostages will have a very un-merry Christmas.

Cartoon Network has passed along the episode synopsis and two dozen images for the upcoming Batman: The Brave and The Bold episode “Day of the Dark Knight!.” To get a closer look at the images, click on the thumbnails below.

The all-new Batman: The Brave and The Bold episode “Day of the Dark Knight!” is scheduled for January 2th, 2009. Below is the description.

The evil Morgan Le Fey has taken over Camelot and turned everyone to stone! To thwart her plans, Merlin transports Batman and Green Arrow back in time to retrieve Excalibur, defeat Etrigan, battle dragons and return King Arthur to the Throne! In the teaser, Guy Gardner teams up with Batman to stop a criminal riot at Green Lantern Corps.

Stay tuned for our exclusive coverage of Batman: The Brave and The Bold updates.

“Batman: The Brave And The Bold” Scheduled To Premiere On Teletoon In January 2009

A representative for Teletoon has informed The World’s Finest that Batman: The Brave and The Bold is slated to premiere on Sunday, January 11th, 2009 at 9:00am (ET) on the Canadian animation network. Batman: The Brave and The Bold will kick off its run on Teletoon with the episode “The Rise of the Blue Beetle,” with new episodes to follow every Sunday in the 9:00am (ET) timeslot. The official description for the series is as follows, as seen below.

Building on the iconic character of Batman, this latest interpretation of the classic Batman franchise finds Batman teaming up with heroes from across the DC Comics Universe, delivering nonstop action and adventure with a touch of comic relief in this new animated series.

Light in tone, Batman: The Brave and the Bold will introduce younger viewers to a famed hero while still offering plenty to excite diehard fans–the visual style of the series has been inspired by the look and feel of the work of 40s and 50s classic comic book Batman artists. Fans of all ages will cheer the caped crusader as he battles crime and injustice.

Best of all, Batman isnt going at it alone! Blue Beetle, Green Arrow, Aquaman and countless others will get a chance to uphold justice alongside him. Though still based in Gotham City, the Caped Crusader will frequently find himself outside city limits, facing situations that are both unfamiliar and exhilarating. With formidable foes around every corner, Batman will still rely on his stealth, resourcefulness and limitless supply of cool gadgets to bring justice home!

Batman: The Brave and the Bold is a 30-minute animated action/adventure series from Warner Bros. Animation and based on the DC Comics character Batman, created by Bob Kane. The series is executive produced by Sam Register, and the producers are James Tucker and Linda M. Steiner. The series is based upon the popular DC Comics comic book characters.

On top of premiering the new Batman: The Brave and The Bold, Teletoon will also continue to air reruns of the popular The Batman animated series Monday to Friday at 5:30pm (ET) beginning January 5th, 2009.

Official details on the statue can be found below.

On the mystical island of Themyscira, a proud, strong warrior race of Amazon women lives in a utopian civilization shielded from the corrupt world of man. But a betrayal within the Amazon sisterhood leads to the escape of Ares, the God of War, and Amazon Princess Diana must capture him before he unleashes global chaos and destruction. With the aid of cocky fighter pilot Steve Trevor, Diana tracks Ares to the United States for a battle unlike any humankind has ever faced. A fabulous voice cast Keri Russell, Nathan Fillion, Alfred Molina, Virginia Madsen, Oliver Platt, Rosario Dawson and David McCallum injects blood, thunder and passion into this epic tale of the princess who becomes the worlds favorite super heroine.

This hand-painted, cold-cast porcelain maquette of Wonder Woman is based on art from the highly anticipated Warner Home Video direct-to-DVD animated original movie Wonder Woman! Measuring approximately 9.25 tall x 3.75 wide x 4.25 deep (including the base), the maquette includes a 4-color Certificate of Authenticity and is packaged in a 4-color box. Limited Edition of 4000! Advance-solicited; on sale March 25, 2009 for $89.99 US.