hosted by popgeeks.com | Kodansha Announces Parasyte Full-Color CollectionGreen M&M: There is a petition to keep her Sexy
Close
Skip to content
Menu

The details on the first issue of this new ongoing comic series, released earlier this week by DC Comics, are available below.

BATMAN: THE RBAVE AND THE BOLD #1

Jumping out of your TV and into your comics comes the highly anticipated new cartoon Batman: The Brave and The B old! Each month, The Dark Knight Detective faces challenges that only he can solve with a little help from his DC Universe pals! Thrill as Batman visits new places and old friends. Chill as he chases down the most powerful villains in the DCU, armed with only his Bat-gadgets and his wits!

In this awesome first issue, show writer Matt Wayne joins forces with Andy Suriano and Dan Davis to bring you “The Panic of the Composite Creature,” a tale of terror and adventure! All this action plus Batman’s secret files await you each and every month. So hang on to your seats, and get ready for the read of your life!

In related news, the Batman: The Brave and The Bold episode Journey to the Center of the Bat!, the next all-new episode of the series, premieres at 8pm(ET) this Friday, January 30th, 2009 on Cartoon Network. For further details on the new episode, click here!

New “Batman: The Brave And The Bold” Scheduled For February 2009 On Cartoon Network

Below are official descriptions and respective airdates for the new episodes of Batman: The Brave and The Bold slated for February 2009, and beyond, on Cartoon Network.

Friday, Febuary 6th, 2009 – “The Eyes of Despero!”
The Green Lantern Corps is MIA after a battle with Despero and Batman must team with G’Nort, Guy Gardner and Sinestro to defeat Despero before he turns the living Green Lantern planet into a weapon.

Friday, February 20th, 2009 – “Return of the Fearsome Fangs!”
Batman and a reluctant Bronze Tiger fight to prevent Fox, Vulture and Shark from invading an ancient Chinese temple and stealing the sacred animal totem from within.

Friday, February 27th, 2009 – “Deep Cover for Batman!”
Batman swaps places with Owlman — his criminal counterpart in an alternate Universe — to stop the Crime Syndicate from taking over the world.

Friday, March 6th, 2009 – “Game Over for Owlman!”
On Earth, Owlman has been perpetrating crimes disguised as Batman and assembled all the villains to join him.

Batman: The Brave and The Bold airs every Friday at 8pm (ET) on Cartoon Network.

The Batman: The Brave and The Bold episode Journey to the Center of the Bat!, the next all-new episode of the series, premieres this Friday, January 30th, 2009. For further details on the new episode, click here!

Teen Titans to Get Hero’s Welcome on Boomerang

Fighting for truth, justice and the last slice of pizza, the D.C. Comics Teen Titans are five super heroes who are living proof that you’re never too young to save the planet. The animated series debuts in its new home Monday-Friday on the commercial-free Boomerang network starting Monday, Feb. 2 at 10:30 p.m. (ET) as part of the “Boomeraction” block which includes Justice League Unlimited at 11 p.m. (ET) and The Batman at 11:30 p.m. (ET). Teen Titans originally launched on Cartoon Network in 2003 to great viewer acclaim, making it an instant classic for younger generations and a favorite for comic book fans of all ages.

Based on the long-running DC Comics series, Teen Titans features five teenage superheroes who each exhibit special powers. The team is led by Robin, the acrobatic and daring group leader with a stocked utility belt and no fear. Beast Boy, small in stature and quick with a joke, can shift into the form of any animal, from a tiger to a Tyrannosaurus Rex. Starfire is new to Earth and nave to its ways, but when it is time for a throw-down, she fights as hard as any of the others. The spooky, deadpan Raven can control inanimate objects with her powerful mental abilities. Hulking Cyborg is half-man, half-machine and the most powerful member of the team.

But Teen Titans is not all about superpowers and bad guys. Like most teens, they love hanging out with their friends, playing video games and going to parties. Like most adolescents, they are trying to find their place in the world and deal with their growing pains as well as they can.

“Now is a great time for young people to see they can accomplish anything,” said Stacy Isenhower, senior vice president of programming and scheduling for Boomerang and Cartoon Network. “Teen Titans is a perfect fit for Boomerang as the show depicts young people accepting responsibility for their futures and the well-being of others.”

Teen Titans will air weeknights beginning with the very first episode. The first week of programming features the following episodes:

* Monday, Feb. 2: “Divide and Conquer” – Cinderblock busts into prison — and the Teen Titans show up to stop a jailbreak.

* Tuesday, Feb. 3: “Sisters” – When a mysterious alien probe shows up to haul Starfire away, sweet-natured Star has no idea why it came.

* Wednesday, Feb. 4: “Final Exam” – Before Slade will hire the new Hive Agents, he requires that they pass one ‘final exam’ — they must destroy the Teen Titans.

* Thursday, Feb. 5: “Forces of Nature” – Dark ominous clouds blow in from the East, bringing thunder and lightning with them: two forces of nature made flesh in the form of costumed super-teens.

* Friday, Feb. 6: “The Sum of His Parts” – Cyborg’s power cell is dying. And while the problem is easily fixed with a new battery, Cy is reminded of something he doesn’t like to think about: he’s not completely human.

Find out more on Teen Titans by visiting the Teen Titans subsite here at The World’s Finest. Stay tuned for further updates. 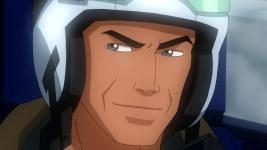 Cartoon Network has passed along the episode synopsis, video clips, and over a dozen new images for the upcoming Batman: The Brave and The Bold episode “Journey to the Center of the Bat!.” To get a closer look at the images, click on the thumbnails below. 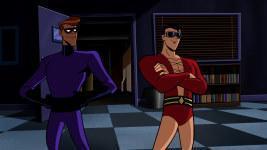 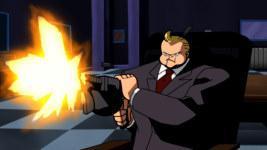 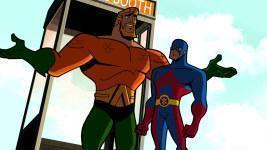 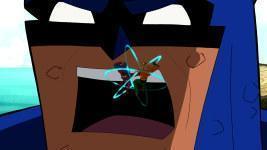 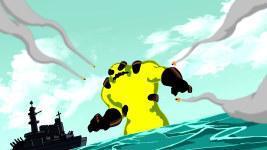 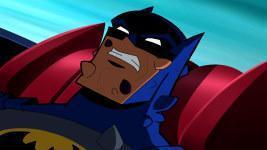 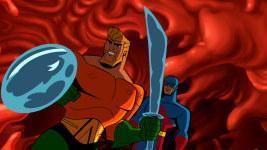 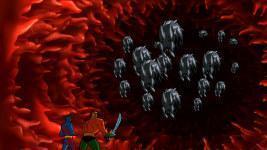 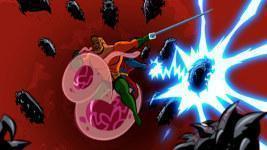 This week Batmans life hangs in the balance when he is poisoned by Chemo, who is under the control of the evil Brain. The Atom races to the rescue with Aquaman by shrinking down and entering Batmans bloodstream. While Aquaman and the Atom battle the infection deep inside Batmans body, Batman struggles to end Chemos rampage and defeat the Brain! This weeks teaser features Elongated Man and Plastic Man teaming up to derail a bank heist and capture the criminal Baby Face.

Further information on the episode, including a detailed cast list, is available at our our Batman: The Brave and The Bold subsite. Stay tuned for further episode details and exclusive content.