The World’s Finest has a look at the tentative November 2013 schedule for Justice League Unlimited episodes airing on the Vortexx programming block. The critically-acclaimed classic series is a regular part of the block, airing Saturday mornings on The CW network. The Vortexx programming block – as described in press details – is an entertainment platform focused on delivering content, activities and products featuring high-energy action, adventure and comedy. The block airs Saturdays from 7 a.m. – noon on The CW. Classic episodes of Justice League Unlimited, the fan-favorite Cartoon Network animated series starring classic DC Comics characters, air Saturdays at 9:30am (ET/PT). Continue below for schedule details specific to Justice League Unlimited.

Justice League Unlimited
November 2nd, 2013 at 9:30am (ET/PT) – “Patriot Act”
When an out of control super soldier threatens Metropolis, Green Arrow leads seven non-powered Justice Leaguers, including Crimson Avenger and Shining Knight, in a battle they can’t hope to win.

Justice League Unlimited
November 9th, 2013 at 9:30am (ET/PT) – “The Great Brain Robbery”
A mystical accident leads to Lex Luthor and the Flash’s minds being swapped into each other’s bodies.

Justice League Unlimited
November 16th, 2013 at 9:30am (ET/PT) – “Grudge Match”
Roulette starts Metabrawl again, this time with an all-female fight card made up of Justice Leaguers.

Justice League Unlimited
November 23rd, 2013 at 9:30am (ET/PT) – “Far From Home”
Supergirl, Green Lantern and Green Arrow travel into the future where they meet the Legion of Super Heroes and their enemies The Fatal Five.

Justice League Unlimited
November 30th, 2013 at 9:30am (ET/PT) – “Ancient History”
The Shadow Thief returns and so does Hawkman as more mysteries from “Shadow of the Hawk” are explored.

Schedule details are subject to change without notice.

Classic episodes of Justice League Unlimited air Saturdays at 9:30am (ET/PT) as part of the Vortexx programming block on The CW. Please note these episodes are edited from the original broadcast to meet the current standards of suitable entertainment set by the programmers behind Vortexx. These episodes may be edited for time and content. Click here for further details on this fan-favorite classic series.

Cartoon Network has provided The World’s Finest with new stills and a clip from the upcoming Teen Titans Go! episode “Staring at the Future,” airing tonight, Wednesday, October 30th, 2013 at 7:30pm (ET/PT). The half-hour comedy/adventure series – which features two 15-minute tales – airs Wednesdays at 7:30pm (ET/PT) on Cartoon Network, with rebroadcasts airing during the DC Nation programming block Saturday and Sunday mornings at 10:30am (ET/PT). Please note the new story “Staring at the Future” will be paired with a re-airing of a previously-aired 15-minute tale. Continue below to view a gallery of new images and a clip in the high-definition Quicktime format. The first image leads to the clip, and the remainder to episode stills. 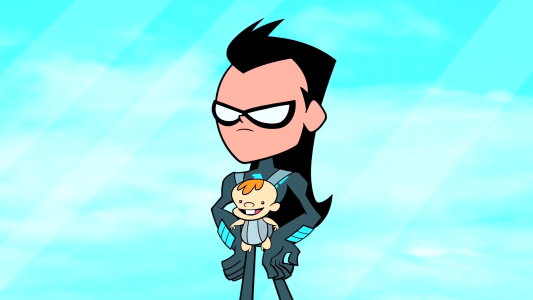 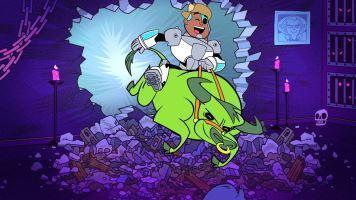 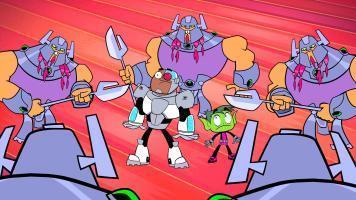 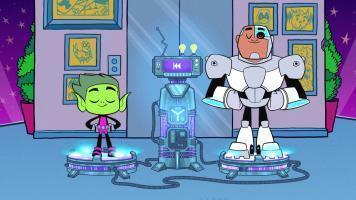 Teen Titans Go!
“Staring at the Future” airs Wednesday, October 30th, 2013 on Cartoon Network
Cyborg and Beast Boy have a staring contest that lasts 30 years, bringing them face to face with a future of adulthood and responsibility … and they hate it.

When the powerful Darkseid and his massive, relentless forces invade Earth, a group of previously unaligned super heroes – misunderstood and, in some cases, hunted by the authorities – discover the only way to fend off the attack will be to work together as a cohesive unit. Batman, Superman, Wonder Woman, Green Lantern, Flash, Shazam and, in his origin story, Cyborg combine their respective talents in an all-out battle to save the planet. Based on the 2012 graphic novel, “Justice League: Origin,” by Geoff Johns & Jim Lee, JUSTICE LEAGUE: WAR provides a glance into the world before the Justice League was created, and offers the initial animated incarnation of DC Entertainment’s “The New 52.”

Click on the thumbnail below to view the trailer in the MP4 720p Quicktime format, with additional formats available by clicking the links under the image. Please note the audio issues encountered in a previous release of the trailer have been resolved.

Click on the thumbnail below to view the trailer in the MP4 720p Quicktime format. Please note the audio issues encountered in a previous release of the trailer have been resolved. 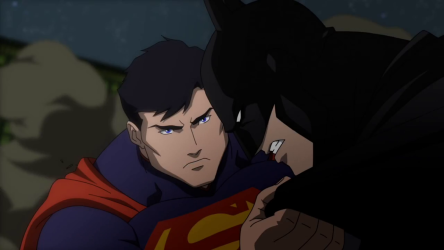 “Based on several factors we’ve had to cancel the Wii and Wii-U versions of Young Justice: Legacy.

We regret that this decision will prevent some fans from playing the game and the finding out what happens in the story. There were a number of reasons ranging from quality issues to lack of retailer support, but know that we didn’t make this decision lightly. We are a fairly new company, and unfortunately both of these platforms presented challenges we couldn’t overcome.

We look forward to delivering the Xbox360, PS3, 3DS, and Steam versions in less than a month.”

More Young Justice: Legacy content, including the trailer and additional images and details, can be found at the The World’s Finest subsite. A description for the game, originally announced in early 2012, can be found below.