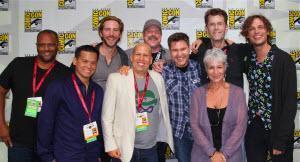 Cartoon Network has provided The World’s Finest with stills and a clip from the new Teen Titans Go! episode “Brian,” airing Thursday, July 31st, 2014 at 6:00pm (ET/PT). The half-hour comedy/adventure series – which features two 15-minute episodes – airs Thursdays at 6:00pm (ET/PT) on Cartoon Network, with rebroadcasts airing at select times during the week. The new Teen Titans Go! segment “Brian” will be paired with a broadcasting of a previously-aired episode. Teen Titans Go! follows the comedic adventures of the teenage superhero team as they deal with what happens between the major battles. 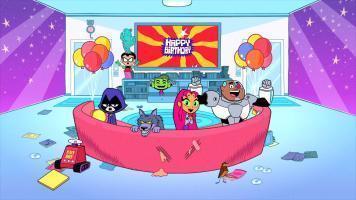 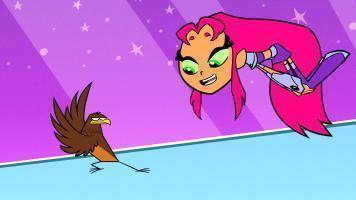 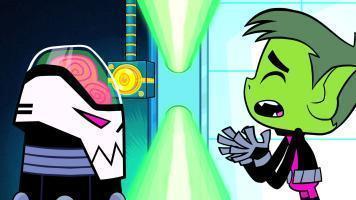 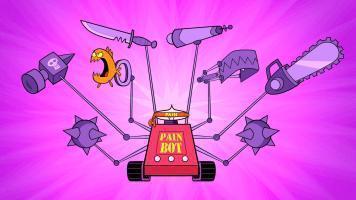 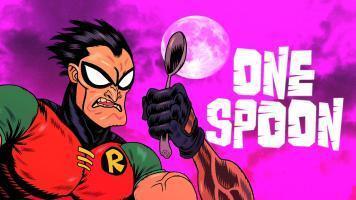 Teen Titans Go!
“Brian” airs Thursday, July 31st, 2014 on Cartoon Network
The Titans and the Little Buddies throw a surprise party for Birdarang and Beat Box. When the Titans leave to check out a crime alert, Cyborg tells the Little Buddies to keep the party going while they’re gone. Eight months later, the Titans still haven’t returned and the party is still going.

The special DC Comics Presents: Batman Adventures one-shot mini-collection, featuring four-full-length comic stories and one short, is now available at comic book stores, hobby shops and for digitial download. The 96-page DC Comics title pulls stories from the classic The Batman Adventures comic title, and its respective spin-offs and reboots, and retails for $7.99US. The Batman Adventures was a critically acclaimed comic book originally launched in the 1990s to coincide with the debut of Batman: The Animated Series. Featured writers and artists include Kelley Puckett, Paul Dini, Ty Templeton, Rick Burchett, Mike Parobeck Bruce Timm, and more.

Continue below for the official details and cover artwork.

Some of the best all-ages Batman stories ever are back in this new title collecting Batman Adventures #2 and 27, Batman: Gotham Adventures #2 and 4, and a short tale from Adventures in the DC Universe #3. Guest-starring Catwoman, The Joker, Two-Face and more!

The Batman Adventures ran for nearly a decade after its early 1990s launch through an assortment of revamps and reboots, and featured stories which took place in rough continuity of Batman: The Animated Series. The series featured work by Paul Dini, Bruce Timm, Kelley Puckett, Mike Parobeck, Ty Templeton, Rick Burchett, Dev Madan, Joe Staton, Tim Levins, Scott Peterson, Dan Slott, and many others. More details on the The Batman Adventures comic book series can be found at The World’s Finest Batman: The Animated Series subsite.

The remaining 26 episodes from the first season of the animated comedy-adventure series Teen Titans Go! are now available to own on home video as part of a two-disc DVD set. Teen Titans Go! – Season One, Part Two: Couch Crusaders follows the comedic adventures of the teenage superhero team as they deal with what happens between the major battles. The Warner Bros. Home Entertainment two-disc DVD release is available through retail and online outlets for $19.97 MSRP.

Click on the thumbnails below for a closer look at the Teen Titans Go! – Season One, Part Two: Couch Crusaders package artwork, along with the official product description following.

Synopsis: A spin-off of the 2002 breakout blockbuster hit from Warner Bros. Animation, Teen Titans Go! follows everyone’s favorite super heroic teen team of Robin, Cyborg, Raven, Starfire and Beast Boy in all new, comedic, 11-minute adventures highlighting the hijinks they get into when they aren’t out saving the world. In between the big fights with super villains, the team’s dynamic and personalities ensures that even down time at the Tower or a trip to the movies promises extreme (and extremely funny) fun.

The Teen Titans Go! – Season One, Part Two: Couch Crusaders home video collection is now available to own on DVD from Warner Bros. Home Entertainment. The two-disc DVD release is available through all retail and online outlets for the MSRP of $19.97. The episodes are also available through Digital HD.

Warner Bros. Home Entertainment is rebranding and re-releasing the three-disc Young Justice: Three-Pack Fun DVD compilation release, originally released back in April 2012. The release, titled Family Multi-Feature: Young Justice, collects the first 12 episodes of Young Justice in one package. The rebranded DVD, along with seven other similar titles, will hit shelves on October 14th, 2014 for the SRP of $19.97. The repackaged three-disc Family Multi-Feature: Young Justice DVD is a re-release of the Young Justice: Three-Pack Fun compilation release which collected three previous single-disc DVD releases together. Continue below for additional details.

Family Multi-Feature: Young Justice
Studio: Warner Bros. Home Entertainment
Release Date: October 14th, 2014
Synopsis: In Young Justice, being a teenager means proving yourself over and over-to peers, parents, teachers, mentors and, ultimately, to yourself. But what if you’re not just a normal teenager? What if you’re a teenage super hero? Are you ready to join the ranks of the great heroes and prove you’re worthy of the Justice League? That’s exactly what the members of Young Justice-Robin, Aqualad, Kid Flash, Superboy, Miss Martian and Artemis-will found out, whether they have what it takes to be a proven hero. Based upon characters from DC Comics. This collection includes the first 12 episodes of the series.

The rebranded Family Multi-Feature: Young Justice three-disc DVD collection, including the first 12 episodes of Young Justice in one package, will hit shelves on October 14th, 2014 for the SRP of $19.97.

Warner Bros. Home Entertainment, through the Warner Archive collection special label, recently announced the upcoming Young Justice: The Complete First Season Blu-ray release. The collection, featuring the first 26 episodes from the acclaimed animated series from Cartoon Network and Warner Bros. Animation, will be available starting August 12, 2014 for $24.95US. The release will be available through most online retail outlets and is now up for pre-order. More details on that release can be found here.